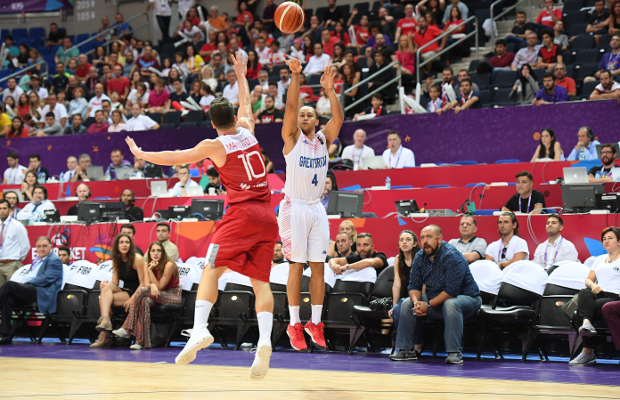 Great Britain Senior Men suffered their second loss in as many days at EuroBasket 2017 after falling to a 70-84 defeat against Group D hosts, Turkey, in Istanbul, on Saturday night.

Joe Prunty’s side rallied in the second half to close within five points in the final period, but were out-played by their opponents to remain in search of a first win.

Gabe Olaseni posted another double-double with 15 points and 14 rebounds, while Andrew Lawrence dished out five assists to go with a joint team-high of 15 points.

The group hosts fired in an opening trey in an ominous early sign, but GB responded in kind with Dan Clark’s reply followed by Teddy Okereafor and Luke Nelson in a 9-0 run. Lawrence joined in on the 3-point scoring from the bench, while GB’s latest capped centurion, Eric Boateng made it 16-10.

However, the veteran centre soon found himself in foul trouble with three picked up in quick succession in the midst of a 10-0 run from Turkey, eventually stopped by a trademark inside finish from Olaseni.

Turnovers began to accrue for GB with five in the opening period – one short of their overall total against Belgium – and an 18-23 deficit was quickly doubled with a 7-0 Turkey burst early in the second.

GB went with a small line-up with four guards on the court and did enjoy a brighter spell to cut the gap to four at 30-34 after Nelson’s smart feed found Kieron Achara under the basket.

Turkey were able to find another gear, but were also aided by lapses in both the interior and perimeter GB defence. In contrast, Cedi Osman had a huge block on Achara at the rim, epitomising his defensive effort with his side surging clear in a 15-3 spell.

Lawrence ended the half with an and-1 to see GB trail 36-49 at the break, but with Turkey shooting 53% from downtown, it was a recurring theme from the previous 24 hours.

Turkey looked in total control with a 16-point lead early in the third, but back-to-back baskets from Olaseni completed his double-double and started a 7-0 run with Ben Mockford providing a much-needed spark off the bench with the gap cut in half.

A careless turnover to end the third allowed Furkan Korkmaz to hand Turkey a double-digit advantage at 54-64 to take into the final period. Lawrence stepped up with big plays at both ends to maintain GB’s resilience as Olaseni’s and-1 making it a five-point game.

Six minutes were still left on the clock, but a quickfire 5-0 burst kept GB at bay with Clark’s second three the last points of the game for his side as execution down the stretch faltered.

Melih Mahmutoglu top scored with a game-high 24 points and had six assists as Turkey recorded their first win of the tournament in front of their home fans to join Serbia, Latvia and Belgium on 1-1.

GB coughed up 18 turnovers in the contest – three times as many as their opener with Turkey shooting 46% from beyond the arc.