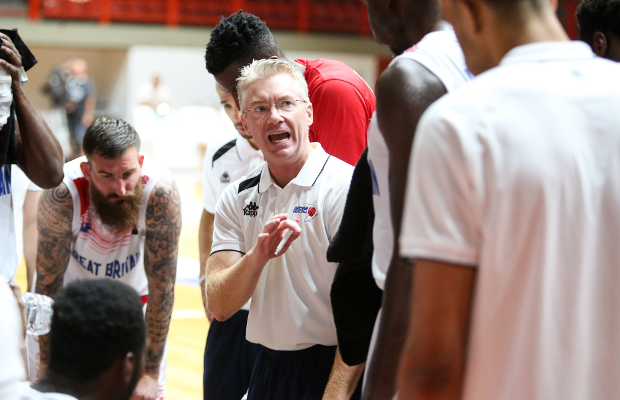 Great Britain Senior Men started their prep ahead of this summer’s EuroBasket with a convincing 86-64 victory over Ukraine in Patras, Greece, on Monday.

Joe Prunty’s side held camp in Manchester last week and have taken 16 players to Greece for the four-team prep tournament.

GB’s 3-point shooting helped create an early lead and they pulled clear in the second before completing the win with debutants Jules Dang Akodo and Carl Wheatle impressing.

Gabe Olaseni top scored with 16 points, while Dan Clark and Teddy Okereafor both netted 11 points with Eric Boateng also in double figures with 10.

Head Coach Joe Prunty said: “It’s a very positive start. It’s our first game and I liked a lot of what I saw. There’s things we need to get better at, defensively. I thought in the first half we missed some rebounds that we needed to get. Offensively, we need to keep working on setting some screens.

“That being said, there was a lot of positives. I like the way we shared the ball and defensively, we got some good coverages.

Clark hit two early triples in scoring the first eight points for GB before adding a third trey from way downtown to make it 16-12. Ben Mockford joined in on the 3-point scoring as he beat the buzzer to give GB a 26-17 first-quarter advantage.

Olaseni then scored 10 straight in the second as GB established a commanding lead and went into the half-time break up 48-29 having kept Ukraine to just 12 points in the quarter.

The gap hit 22 points early in the third with Okereafor scoring back-to-back baskets to make it 57-35. GB continued to dominate and took a 70-45 advantage into the final period.

Kofi Josephs was the third debutant to check in and knocked down his first shot from downtown with four minutes left before Justin Sears and Kavell Bigby-Williams came on for their Senior bows as the opening win was completed.

– GB’s starters were Okereafor, Johnson, Murray, Clark & Olaseni
– Andrew Lawrence & Sacha Killeya-Jones did not suit up, while Luke Nelson was a DNP as a precaution
– There were Senior debuts for Wheatle, Dang Akodo, Josephs, Bigby-Williams & Sears
– Ben Gordon still not with the squad – neither is Myles Hesson
– GB face hosts Greece – after they beat Romania – in their second prep game Tuesday