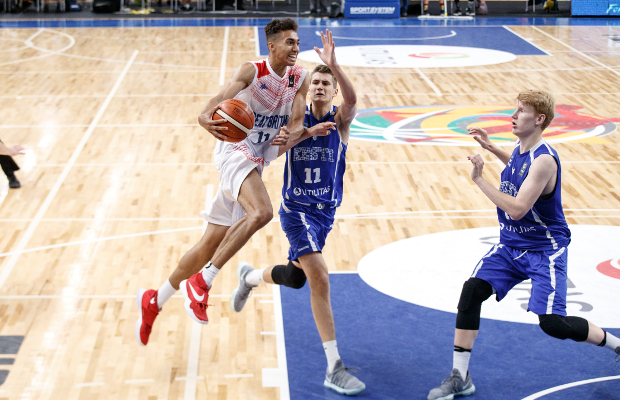 Great Britain Under-18s will go for gold tomorrow at the European Championships after beating tournament hosts, Estonia 75-61, to reach the final and secure promotion, in Tallinn on Saturday.

Alan Keane’s side await either Croatia or Israel in tomorrow’s final after emulating the Under-20s in achieving promotion this summer.

Romario Spence had a huge game with 18 points and 19 rebounds with three other players in double figures in another great team performance.

It was Estonia who edged the opening stages, but a three from Nathan Robinson put GB ahead in the midst of a 7-0 run and they maintained their advantage.

Henry’s three made it 23-18 at the end of the first before Kaiyem Cleary joined in from downtown as the gap hit 11 points in the second. The hosts narrowly reduced the deficit, but GB were still in control up 40-31 at the half-time break.

Estonia edged a tight third period 15-14 to cut the gap further, but could get no closer as GB produced a strong finish in the final 10 minutes.

Sesan Russell’s basket made it 62-47 four minutes into the fourth and GB continued to answer anything Estonia had in response with Boachie-Yiadom’s dunk sealing an emphatic victory ahead of the final minute.

– GB’s starters were Henry, Russell, Round, Boachie-Yiadom & Kitenge
– The last U18 junior side to earn promotion were England in 2012
– Spence’s double-double was the third for GB after Kitenge & Boachie-Yiadom