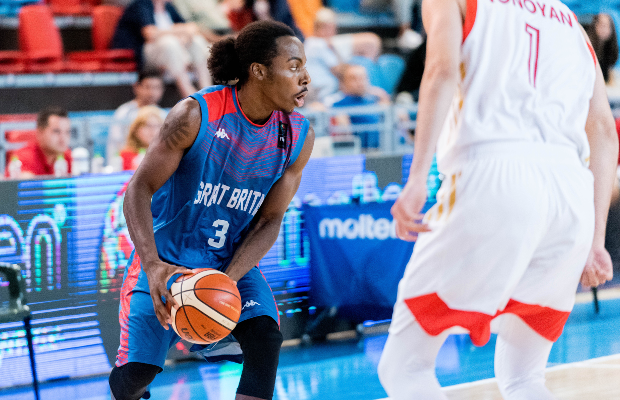 Great Britain Under-20s claimed their first win at the European Championships as they held their nerve to see off Russia for an impressive 64-57 victory in Oradea, on Saturday.

Andreas Kapoulas’ bounced back in style from an opening loss with a strong defensive display boosting their hopes of making it out of Group B.

“It was a very gutsy bounce back performance by our players after yesterday’s loss to Netherlands,” said Kapoulas.

“We played with good composure on the offensive end and executed our defensive game plan very well against a solid Russian side.

“Now we need to have a very quick turnaround and fully concentrate on our game versus Slovakia tomorrow.”

Akwasi Yeboah starred with a 22-point haul including some vitally important plays in the fourth, while Carl Wheatle added nine points and 10 rebounds.

GB scored the first four points of the game including a putback dunk from Josh Steel before Russia ended a near four-minute drought with a 5-0 run. The two teams traded baskets for the conclusion of the first with GB down by one at 11-12.

Yeboah scored six early points to push GB ahead with a 9-0 run making it 26-18. Andre Arissol netted a triple to keep his side in control and they took a 31-26 advantage into the half-time break.

Russia quickly made their move with a 9-2 start to the third as they threatened to pull away. However, GB maintained their defensive intensity and were just a point behind at the end of the third as Amin Adamu beat the buzzer with a corner three.

The game remained tightly contested in the early stages of the fourth before Yeboah began to take over.

The Stony Brook forward netted a triple to tie the game at 50 and edged GB ahead before following suit with another triple soon after making it 57-52 with 4:10 left on the clock.

Russia were not going away and after RJ Eytle-Rock’s huge and-1 play, they answered with a three to make it 60-57 inside the final minute. Yeboah came up with another crucial basket and a defensive stop was followed by a pair of free throws from Wheatle to seal the win.