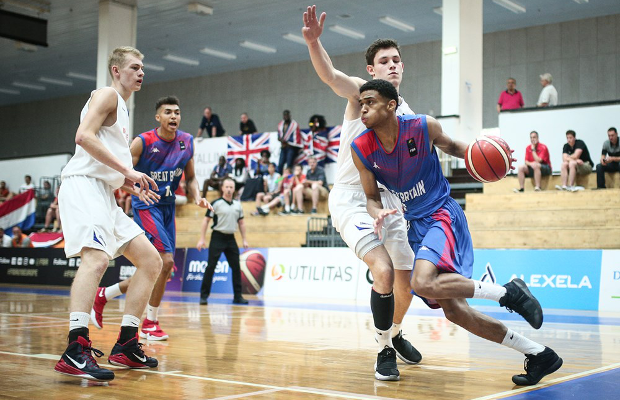 Great Britain Under-18s suffered their first loss at the European Championships in Tallinn, Estonia after falling to Sweden 67-69 on Sunday.

Alan Keane’s side drop to 2-1 in Group A, but are still well placed to advance to the last eight with games against Luxembourg and Albania to follow tomorrow’s rest day.

GB scored the opening four points of the game and led 16-13 by the end of the first. Sweden hit back in the second to lead by as many as five, but GB responded to go in level at 28-28 at half-time.

Both teams struggled to find their range in the first half with the flow of the game also disrupted by numerous fouls at both ends.

GB re-gained their lead through Nelson Boachie-Yiadom early in the third as the two teams traded baskets throughout. Sweden compiled a 7-0 run late in the quarter before Romario Spence’s basket made it 50-49 to GB ahead of the final 10 minutes.

GB finished 0-of-15 from beyond the arc with Sweden’s Erik Persson netting five in his 25-point haul.

– Starters were Russell, Henry, Cleary, Boachie-Yiadom & Kitenge
– Jacob Round was a DNP having limped out of yesterday’s game against the Netherlands.
– GB will qualify for the last eight if they win both of their final two games

GB U18s are next in action against Luxembourg at 2pm UK time on Tuesday.