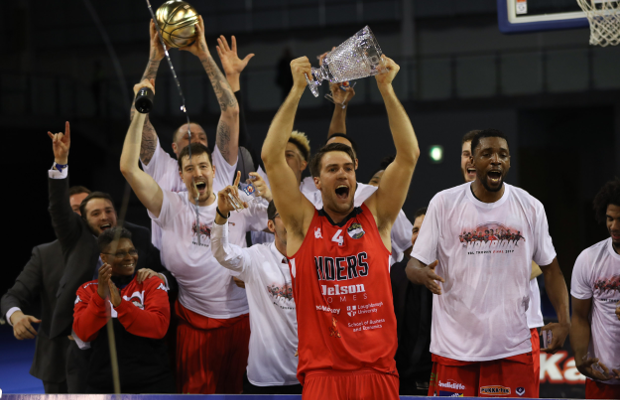 Leicester Riders made it back-to-back BBL Trophy titles after cruising to a 91-58 success over Plymouth Raiders at the Emirates Arena, Glasgow.

A 15-0 close to the opening period put the Riders up by 20 and they never looked back en route to a record-breaking winning margin of 33.

Taylor King came out firing with 13 points in the opening 10 minutes on his way to picking up the Final MVP award as he finished with 20 points and 10 rebounds.

VIDEO: The Leicester Riders are the 2017 BBL Trophy Champions!#WeRideNorth pic.twitter.com/HhlpDoFSAE

Pierre Hampton added 16 rebounds, while the Riders’ bench imposed themselves with Eric Robertson netting four triples and the British contingent of Drew Sullivan, Andy Thomson and Conner Washington all impressing.

“We set the tone early with some great plays at both ends and I thought the bench was excellent today,” declared Rob Paternostro.

“I’m proud to coach this team – they gave it everything they have got.

“We had the two weeks to prepare and we needed that as we were not 100% healthy coming in.

“I could see that the guys were eager to play and we did a great job.”

King opened the scoring with the first five points and would cap a 15-0 close to the quarter with a three at the buzzer to make it 27-7.

It was a tale of two contrasting defences and while Plymouth did offer a brief rally with a 12-2 run, another Riders surge restored their 20-point advantage before half-time.

The 26 first-half points were a record-low in Trophy Finals history and Leicester’s defence showed little remorse as they continued to frustrate their opponent’s offence.

The Riders pushed their lead past 30 heading into the final quarter and late triples from Shane Walker and Brandon Clark completed the routine win in style.

Leicester are strong favourites to add at least one more title to their collection by the end of the season as they currently hold a commanding lead at the top of the BBL Championship.