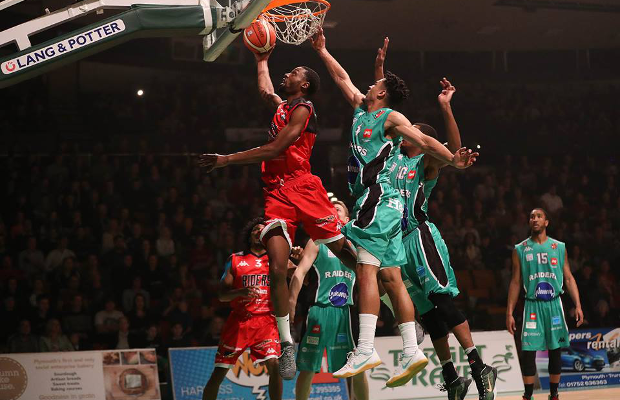 Plymouth Raiders will take on Leicester Riders in the BBL Trophy Final at the Emirates Arena, Glasgow, on March 19.

The Raiders were beaten 90-83 away at Worcester Wolves on Friday night, but secured an overall 168-179 success despite seeing their 18-point first leg advantage cancelled out by the second period.

Trevor Setty netted 26 points in an inspired display against his former side, but a combined 45 points from Donte Nicholas and Cory Dixon helped Plymouth see out the tie.

Meanwhile, Leicester continued the defence of their title with a convincing double victory over Cheshire Phoenix.

Taylor King netted a team-high 19 points in Sunday’s victory against his former side as the Riders racked up 34 points in the second period en route to back-to-back 20-point wins.

It will be Leicester’s fourth Trophy final in the last five years with Plymouth’s last final coming in 2012 prior to the permanent switch to Glasgow.

Plymouth’s sole piece of BBL silverware also came in the Trophy when they defeated Newcastle Eagles in the 2007 Final on their opponents’ home floor with Carlton Aaron named MVP.

The final will be broadcast live on the BBC Sport website and red button.

Tickets can be purchased here.