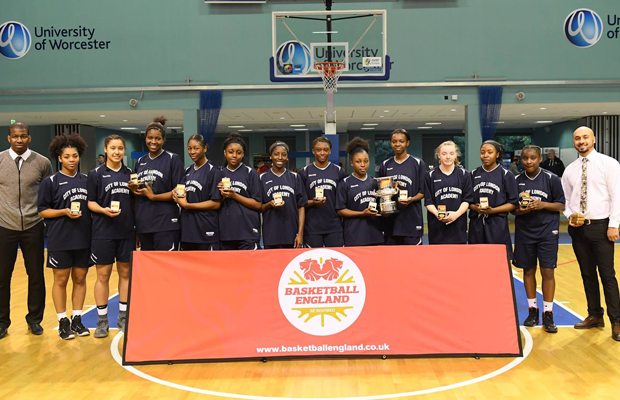 Southwark Pride dominated on their way to a 57-22 win over Team Solent Kestrels to claim the 2017 National Cup on Sunday in Worcester.

Pride jumped out to a 14-0 lead and never looked back, holding Solent to single digits in every period and never allowing them to get in the game as they avenged a 23 point loss earlier in the year and handed the Kestrels their first defeat of the season in emphatic fashion.

It was a memorable victory for the young Southwark squad, who are all Under-19 and primarily made up of Seniors who will be departing at the end of the season, as they look to have a final season together to remember.

Ire Ozzy-Momodu, who has committed to NCAA Division 1 Robert Morris next season, picked up MVP honours with a 12 point, 11 rebound double double, Alimat Onuyemi-Daniel joined her in double figures with 10, whilst Niagara University commit Emerald Ekpiteta had 10 rebounds to go with her 9 points.

Chandero Jones-Aryeh finished with 9 points, and caused problems for Solent with her penetration to the hoop drawing fouls, point guard Ibilola Oyedeji had 6 rebounds and 6 assists to go with her 3 points for Southwark, but it was on the defensive end that Head Coach Jackson Gibbons was most impressed.

Pride saw Kestrels turn the ball over 21 times, and held them to 7 of 64 (11%) shooting overall. Ekemini Liron Essien, who had 33 points the last time these two sides met, was held to just 3 on 1 of 8 shooting whilst turning the ball over 8 teams.

“I thought our girls played outstanding defence today,” Gibbons said. “We lost to them previously by 25 points so we wanted to put ourselves in a position where they weren’t getting easy scores and where, if we did what we were supposed to do on defence, the offence would take care of itself. I thought the girls did a great job of that today.”

And talking of his squad, Gibbons added:

“They are a very, very, very, special group, that’s all I can say. We’re very blessed as a club to have such a wonderful group of girls and I hope that they can sail off into the sunset, but even if they don’t, our journey’s been wonderful and I’m very pleased for the success of them all.”

Ozzy-Momodu echoed her coach’s sentiment, and said their earlier loss to Solent was a big motivation coming in.

“That was the main reason that we got the win, that was our drive,” she said. “But to do it for ourselves as well, we’ve never won this division before so why not win it?

“It’s very special and important because I want to win as many games with these girls as possible, some of them I’ve been playing with for six years and it’s the last time I’ll be playing with them, so it’s important.

Jodi Jerram led Solent with 6 points and 7 rebounds, as the team matched their output in the first half (8) in the fourth quarter alone (9).

“Absolute respect for Southwark Pride,” he said. “They came and had a game plan, played quick, very physical and they’re very smart basketball players. They executed their game plan today. Unfortunately, for as much preparation as we did, we didn’t execute ours. Take nothing away from them, but I feel like we didn’t represent ourselves the way we can.”