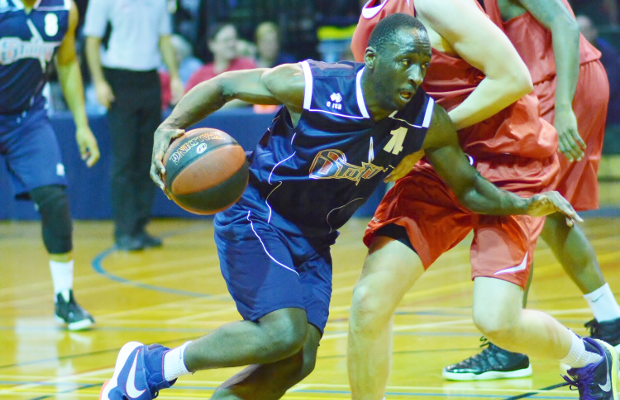 Check out the latest recap of all the NBL action from D1-D4 as a couple of teams suffered their first defeats of the season.

Team Northumbria (8-1) are the new leaders in D1 after picking up two home wins over the weekend. Marc Steutel’s side edged out Bradford Dragons (5-2) in a 94-91 victory as Malcolm Smith put up 33 points off the bench with Blayne Freckleton and Lewis Champion adding 19 points apiece.

The following day, Northumbria claimed another important home win as they claimed an 82-77 success over Manchester Magic (5-2) with Smith adding a further 19 points to his weekend tally with the hosts producing a late 9-2 surge to get the victory.

It proved to be the second loss on the weekend for the Magic as their unbeaten run ended on Saturday with Lancashire Spinners (2-4) holding off a fightback to record an impressive 69-65 win. Jack Hudson filled the stat-sheet with 18 points, 12 rebounds, four assists and four steals with Connor Murtagh netting 17 points.

Derby Trailblazers (7-0) may have been dislodged from top spot, but remain unbeaten after grinding out a 62-56 victory at home to Leicester Warriors (1-5) as Joshua Ward-Hibbert posted 17 points and 11 boards. The Trailblazers battled back from five down at half-time with Rema Lascelles narrowly missing out on a triple-double with 13 points, 13 rebounds and nine assists.

D1 newcomers Loughborough Student Riders (6-0) also maintained their winning run after denying Worthing Thunder (1-5) with a 65-66 win on the road, despite 36 points and 10 rebounds from Lyonell Gaines. The home side led by as many as nine points, but were out-rebounded 32-44 in the contest with Alex Roberts netting a 25-point haul in the win.

Team Solent Kestrels (2-3) picked up their second win as they defeated Westminster Warriors (0-6) 84-61 behind three big double-doubles. Marquis Mathis led the way with 33 points and 13 rebounds with Colt Fason adding 25 points and 10 boards, while Louie Kirkman finished with 16 and 10. Meanwhile, London Lituanica (2-4) recorded a 108-78 victory against Hemel Storm (2-3) as Ausridas Petraitis poured in 33 points with Mantas Guzys adding 31.

Also, Reading Rockets (2-3) started the weekend with a 73-90 win on the road at Essex Leopards (0-5) on Friday night. The Leopards rang the changes earlier in the week after a difficult start but suffered another defeat behind a combined 61 points from Craig Ponder and Chris Hooper.

Team Newcastle University (5-0) moved into a three-way tie at the top of D2 after recording their fifth straight victory by beating Ipswich (2-3) 101-94 with Richard Austin and Romonn Nelson combining for 47 points in the win.

Caleb Fuller had 29 points in vain for Ipswich, but had led his side to a 92-94 win on the road at Tees Valley Mohawks (1-4) the previous day with a 28-point haul, while Leigh Greenan added 24 points on 9-11 shooting along with 17 rebounds.

Thames Valley Cavaliers (5-0) continued their unbeaten start with a 69-82 road win over Doncaster Danum Eagles (1-5) with Baptiste netting 24 points, while Nottingham Hoods (2-4) denied Liverpool (0-5) a first win by claiming a 70-71 success away from home.

Elsewhere, Derbyshire Arrows (4-2) produced a strong final quarter effort to come from behind and beat London Westside (2-4) 51-52 on the road with a 4-18 fourth period. London Greenhouse Pioneers (5-1) picked up their fifth league win as they defeated Newham Neptunes (1-5) 84-65 with Vladimir Vukovic posting 20 points and nine rebounds for his side.

Myerscough College Spinners (4-2) ended the unbeaten start of University of Chester (5-1) in D3 North after racking up 31 points in the final period to claim a 96-85 victory. Meanwhile, Charnwood Riders (3-2) were in dominant form as they eased past Sefton Stars (0-6) in a 44-123 road victory as Romario Spence top scored with 26 points and Johde Campbell added 19.

Team Birmingham Elite advanced with an 82-51 win over City of Birmingham, while Barking Abbey edged out London Thunder-Lewisham 66-60 in a low-scoring battle in overtime.

Bud Johnston poured in 35 points and was supported by a further 27 from Hank Rivers as Sussex Bears overcame Team Solent Kestrels II in a 96-83 success. Brunel University Ducks defeated Middlesex LTBC 89-83 behind Adam Thoseby’s 27 points and Leeds Force Academy were beaten 59-66 at home to Team Sunderland.

Myerscough College were undone by Calderdale Explorers in a 94-102 defeat as Eddie Davis put up an impressive 43 points with Nathaniel Akins adding 39 as the duo combined for 82 points for the victors. Oaklands College were beaten 56-70 at home to Cambridge Cats and Charnwood Riders advanced with an 89-91 road win at Northants Taurus.

Stoke-on-Trent Knights also progressed to the next round as 28 points from Kieran Jones helped his side record a 63-76 success away at Manchester Giants II, who were led by 28 points from Josh Houghton.

University of Chester were awarded a 20-0 victory against Barrow Thorns with Plymouth Rebels handed the same fate over RCT Gladiators.