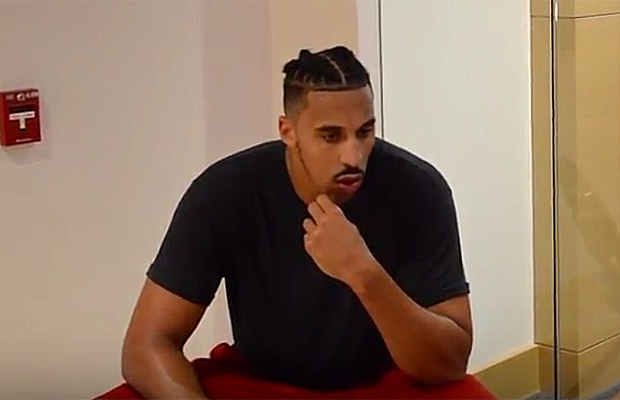 Ryan Richards is “100% focused to be in the NBA by 2018” following his invite to San Antonio Spurs training camp this month, and said he is “willing to do whatever it takes” in an interview that has surfaced on YouTube.

“My goal in the next year is to be an NBA player,” the seven footer said in the interview with his former England teammate, Daniel James, last month.

“I was drafted in 2010, injuries and being a bit immature I didn’t get my chance, but I’ve learned and I’m 100% focused to be in the NBA by 2018, hopefully sooner, but that’s my goal that I’ve set myself and I’m willing to do whatever it takes to get there in the next two years.”

Richards has played for 14 different teams from all over the world since being drafted six years ago with spells in Austria, Poland, Greece, Hungary, China, Lebanon, Bahrain and Iran amongst others.

Though he said he wouldn’t change his journey, he did admit if he could go back he would have more people around that he trusted, and “definitely could have made some better decisions.”

The 25-year-old former Kent Crusader competed in The Basketball Tournament this summer, where he shared the $2million prize as part of Overseas Elite’s winning squad.

Richards was in the US for workouts with former GB teammate Devon van Oostrum, who also features in the video. Check it out in full below:


You can also find an interesting interview with Ryan’s agent William McCandless at News4SanAntonio.com, talking more about Ryan’s career and how the Spurs camp deal came about.