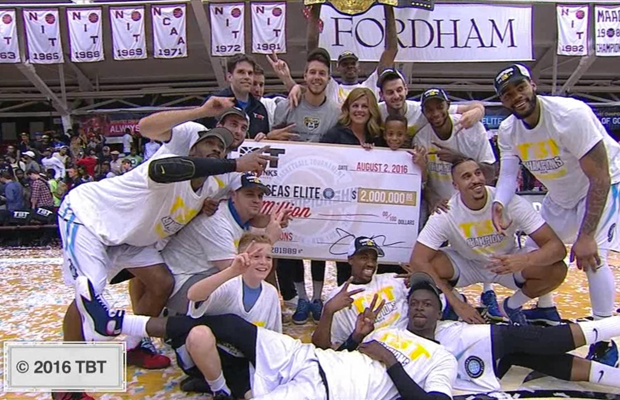 Ryan Richards and his squad Overseas Elite won the 2016 edition of The Basketball Tournament for a $2million prize on Tuesday night in New York City, USA.

Overseas Elite defeated Team Colorado 77-72 in the final to defend their Championship and move to 13-0 all time in The Tournament, and despite the former Kent Crusader playing 6 minutes and having a single point on a free throw, Richards will still take home $174,000 for his role on the team’s second straight championship, according to ESPN’s Darren Rovell.

Richards dispatched of Pops Mensah-Bonsu’s City of Gods squad, 103-92, in the semi-final last week. Mensah-Bonsu had 10 points, 4 rebounds, 2 steals and 2 blocks in 18 minutes, while Richards had 2 points and 3 rebounds in 4 minutes of action.

Richards’ best scoring performance of the tournament came in the Super 16, with 13 points, 2 rebounds and 1 assist in just 14 minutes in a 91-80 over Ram Nation.

.@OverseasElite is 13-0 all time in TBT play, won a combined $3 Million

The tournament, set up in 2014, is a 64-team, open-application, 5-on-5, single elimination, winner takes all event. In its inaugural year, the prize money was $500k, upped to $1million last year and then doubled this year.