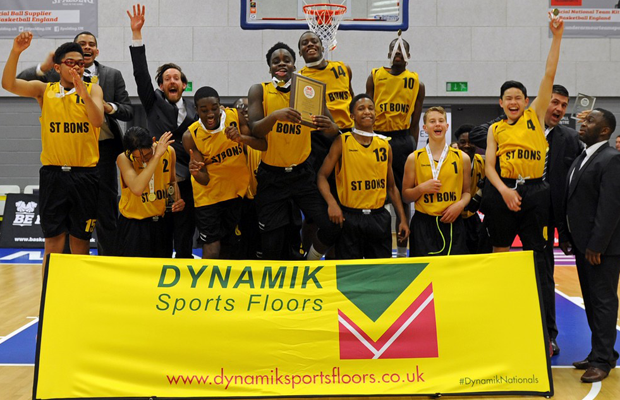 St Bonaventure’s became the first school to win four boys National Schools titles in the same year after claiming the Under-13, Under-14, Under-15 and Under-16 National schools premier competition championships this season at the NBPC in Manchester.

The East London school, which is closely linked with National League side Newham Youngbloods, cemented themselves with big final performances across all age four groups.

In the U13 Boys competition, Christian Adun had 24 points and 15 rebounds to lead St Bonaventure’s to a 104-60 win over Brentwood’s St Martin’s.

Franklin Agu stepped up with a huge 19 point, 21 rebound double double in the U14 Boys final for a 72-59 win over St Matthews from Manchester.

In the U15 competition, an 83-70 win over St Gabriel’s – also from London, was led by Hadrian Basillo’s 20 points, 7 rebounds, 3 steals and 3 assists, while in the U16 Final Devante Abana-Odita had 16 points and 20 rebounds to lead St Bons to a 98-78 win over Reddish Vale from Manchester.

“This is massive for us,” Head Coach Aaron Senior said.

“The boys come in early every morning for practice ready to work and improve and they really deserve this recognition. The buzz this weekend was amazing with everyone talking about one East London school dominating the national stage. Our support was phenomenal too and everyone was transfixed, keen to stay in the loop on our progress but we just kept winning. It was nice to have some parents travel up to Manchester too to support their sons. It was a truly memorable weekend.”

Basketball historian and legendary coach Humphrey Long confirmed that it was a record feat, noting that Barking Abbey in 2011 and Ellesmere Port Catholic High School in 2005 had the previous record with 3 wins each.

Head of PE at St Bon’s, Chris Topping added: “I couldn’t be more proud. The boys worked so hard for this and wanted to win so much.”