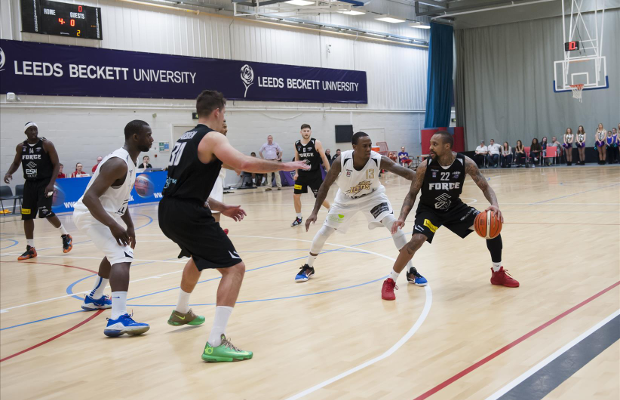 The BBL Championship title will be decided on the final weekend of the season after an another dramatic round of action in the top-flight.

Leicester Riders still control their destiny, but suffered a shock 81-78 defeat away at Leeds Force on Friday night as Matt Newby’s side boosted their playoff hopes – with two places still to be decided.

Kwan Waller netted a game-high 29 points while Rob Marsden contributed 11 points and 10 rebounds including the all-important game-winner in the final minute. Force shot 11-of-22 from 3-point range, but saw the Riders wipe out an eight-point deficit in little over a minute before Marsden struck.

Neil Watson poured in a season-high 31 points in the defeat, but the Riders bounced back with a convincing 77-56 win at home to Sheffield Sharks as Tyler Bernardini top scored with 20 points, while Watson and Trevor Gruis added 15 points apiece.

Newcastle Eagles took care of their own double-header after following up a 98-71 home win over Glasgow Rocks – their 15th straight against the Rocks – on Friday, before coming from behind to see off London Lions 84-93 at the Copper Box Arena on Sunday.

The starting five all reached double figures in both wins with Andy Thomson still on the sidelines. Charles Smith had 17 points, 10 rebounds and five assists in Friday’s win at Sport Central, before putting up 21 & 14 against the Lions as the Eagles recovered from being down 11 late in the first half.

Leicester host Newcastle next Friday at the LCS Arena knowing that victory will secure them the Championship, while Fab Flournoy’s side will defend their league title with two wins from two.

The weekend went got even better for Leeds as their playoff rivals, Plymouth Raiders, blew an early double-digit advantage as they went down 70-78 at home to Bristol Flyers. Andreas Kapoulas’ side were already out of post-season contention following Saturday’s 77-82 loss against Worcester Wolves, and were also without American duo Tyrone Lee and Cardell McFarland.

However, captain Greg Streete posted 30 points along with nine rebounds and four assists, while Mathias Seilund landed two big 3-pointers late on to finish with 21 points and Doug McLaughlin-Williams netted four triples in an explosive 28-10 third quarter from the visitors.

The result meant that despite losing to Newcastle, London Lions secured their spot in the playoffs, leaving the final two places to be decided on the final weekend. Leeds and Plymouth have identical records, but it’s Daryl Corletto’s side who have the head-to-head, although the two teams could become involved in three or four-team ties with the Lions and Cheshire Phoenix.

After losing in Leicester on Saturday, Sheffield Sharks responded by claiming a 69-82 road victory over Manchester Giants the following day. Antone Robinson produced another double-double with 18 points and 10 rebounds with Jerrold Brooks still out for the Sharks. The visitors pulled away in the fourth to earn a win that lifts them into third place.

Worcester Wolves are still in contention for a top-three finish as they are currently level with the Sharks, but have an inferior head-to-head record. Paul James’ side were beaten 101-89 in London on Friday before holding on to beat Bristol 77-82 on the road on Saturday.

Meanwhile, Glasgow Rocks will finish in fifth and will take on either the Sharks or Wolves in the first round of the playoffs.

Manchester’s loss at home to Sheffield means they join Surrey Scorchers on a 7-24 record, but stay off the bottom having swept the Scorchers during their series. Ingus Bankevics netted 19 points for the Giants as they closed to within two points of the Sharks at the start of the fourth, but ultimately fell short.