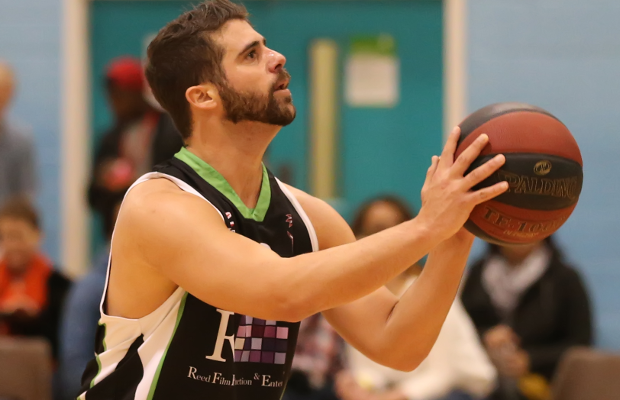 Check out our latest round-up of the action from the NBL this past weekend from Division 1 down to the NBDL.

Manchester Magic (12-1) maintained their advantage at the top of D1 going into this week’s National Cup Final as they defeated Kent Crusaders (1-9) 68-87 on the road. Ellis Cooper had 14 points and 11 rebounds to lead a balanced attack with minutes spread throughout the roster.

Derby Trailblazers (10-2) remain the leaders of the chasing pack after they saw off the challenge of Reading Rockets (8-4) with an 83-68 victory. David Watts had a game-high 25 points with Dan Watts contributing 18 points in the win.

The Rockets bounced back the following day with an 82-75 triumph over Worthing Thunder (4-9) as they avenged two previous defeats in cup competitions earlier in the season. Danny Carter led the way as captain with 25 points and nine rebounds with James Cambronne’s 31-point, 10-rebound double-double in vain for the visitors.

It was a second loss on the weekend for Thunder having also been beaten 100-81 away at Leicester Warriors (5-7) with Tom Ward absent for both games this weekend. Recent recruit T Rothstein produced an impressive all-round display with 33 points, 12 rebounds and six assists to guide the Warriors to victory.

Lancashire Spinners (8-5) were another side to split a tough double-header for the weekend after following up an 83-71 loss at Essex Leopards (7-5) with an 82-87 triumph away at London Lituanica (7-4) the next day. Albert Margai contributed 11 points, 12 rebounds, eight assists as well as three steals in the Leopards’ win with Ladi Brown scoring 21 points as Essex remain eighth.

On Sunday, the Spinners fought back to force overtime before taking the win in the extra period as Steven Gayle finished with 31 points to deny Lituanica a double-winning weekend. The home side had enjoyed success of their own on the road on Saturday when they edged out Westminster Warriors (2-11) 79-81 despite 31 points from Jon J Johnson. They snapped a losing run in the league behind 25 points and 10 boards from Ausridas Petraitis and a further 20 points from Julius Visockas.

Bradford Dragons (3-10) stunned third-placed Hemel Storm (9-4) with an 87-82 victory with a number of key contributions, led by 21 points from Adria Rodriguez Vinas (pictured) for their third league win. Nick Moore collected 15 rebounds to go with 16 points, while Rafael Saipe netted six triples in his 18-point haul – all helping to counter Nik Rhodes’ 31 points for Storm.

Finally, Team Northumbria (8-3) continue to quietly go about their business as they recorded a 70-64 win over a struggling Tees Valley Mohawks (1-11) side to remain in the top four. Neil Randolph top scored with 23 points including five three’s with Lewis Chapman chipping in with nine points, nine rebounds and five assists in the win.

Bradford Dragons became the final team to book their spot in the semi-finals of the National Trophy after claiming an 85-98 win on the road at Westminster Warriors. Rihard Sulcs top scored with 23 points for the visitors, closely followed by Henri Bongoma’s 22.

London Greenhouse Pioneers (8-2) remain the leaders in D2 after claiming an 89-83 win away at Liverpool (4-7). East London All Stars (8-4) are not far behind as they collected their eighth win of the season by beating Eastside Eagles (1-9) 74-60 as Arif Sempala led the way with 17 points.

Solent Kestrels (7-3) recovered from a slow start to defeat Derbyshire Arrows (7-3) 59-88 on the road behind 21 points from Louie Kirkman. Ipswich (7-4) round off a group of teams on 14 points in seventh as they claimed an 83-70 success over Worcester Wolves II (2-9) with Tom Sadler leading four players in double figures with 19 points along with 11 rebounds.

Team Newcastle University fell to an agonising 94-95 loss at home to Oxford Brookes University in the semi-finals of the National Shield. Robbie Lemons put up 36 points for the home side, but Abdoulaye Sylla’s 35-point haul guided his side into the final. Oxford will meet Thames Valley Cavaliers in the title showdown after 30 points apiece from John MacCauley and Martelle McLemore led their side to a convincing 70-103 victory away at NULC Knights.