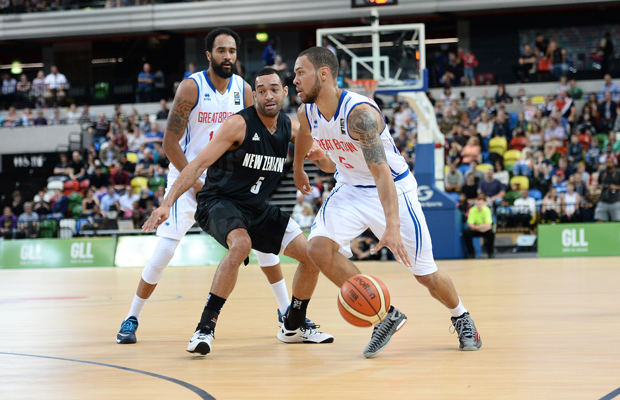 Great Britain’s Senior Men rounded off their summer with their first win after claiming a 76-66 victory over Portugal in Leiden, on Saturday.

Joe Prunty’s side bounced back from yesterday’s defeat against the hosts, Netherlands, to finish their 2015 schedule with a 1-2 record, having also been beaten by New Zealand at the end of last month.

Having led heading into the third, GB saw their advantage disappear before recovering to produce a strong finish and make sure of the win.

“I was pleased, since like yesterday we played with a lot of energy and with a tremendous amount of effort,” said Head Coach Prunty.

“We went behind early in the fourth quarter, but called a time-out and responded very well with rebounding, hustle plays and obviously we put the ball in the basket.

“We made a lot of plays when we were facing adversity and that says a lot about the character of these guys. We are growing something and every time we get together, it is important. It is year by year, day by day.

“We came together this summer to make British basketball better and I believe we accomplished that – but we need to remember it is a journey not a destination.”

An encouraging sign of things to come was back-court duo Teddy Okereafor (pictured) and Alex Young stepping up in the final quarter with a combined 15 points to help GB comfortably pull away down the stretch.

Young top scored with 16 points while Rob Gilchrist impressed particularly in the first half as he added 12 points and 10 rebounds.

Will Saunders also recorded a double-double with 11 points and 10 rebounds with Okereafor also reaching double figures with 11 points.

GB raced into an 11-2 start with Saunders firing in from downtown to cap the run and take his personal tally up to seven early on. Gilchrist scored the next six for GB and they would lead 19-13 at the end of the first quarter after Portugal responded to their slow start.

Chris Caird scored his first senior international points at the line before fellow newcomer Fahro Alihodzic extended the lead at the start of the second. Young capped a 7-0 run with his first 3-pointer to help GB build a double-digit advantage at half-time with the score 34-24 in their favour.

Portugal then stormed in front for their first lead on the back of a 13-0 run. GB responded with a 9-2 burst including a triple from Joe Hart to restore their control. However, Portugal finished with the final six points as GB saw their lead trimmed to three at 50-47 heading into the fourth.

Once again, it was Portugal who came out firing and re-gained the lead with a 9-2 start to the final quarter. GB raised their game to take back control for the final time with Okereafor insitgating a 14-2 run.

In the final stages, GB controlled the game with Young running the show with seven points in quick succession to make sure the game was wrapped up.

All 10 players on the roster got onto the scoreboard as Prunty spread the minutes throughout the playing squad.