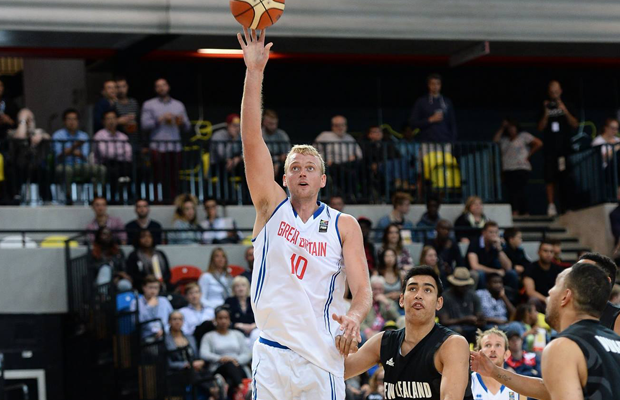 Great Britain Senior Men fell to their second defeat of the summer after losing a close-fought encounter 69-63 against the Netherlands in an invitational tournament, in Leiden on Friday.

Joe Prunty’s side, that featured two debutantes in another experimental side, took a lead into the final quarter but couldn’t hang on for the win.

Dan Clark was the stand-in captain and he led the way with a game-high 23 points while Joe Hart added nine points.

Fahro Alihodzic was handed a start on debut while Chris Caird came on to earn his first cap with the senior side.

“I was really proud of the effort and the energy the guys played with on both sides of the ball,” said Head Coach Prunty.

“We did a lot of positive things in a close game and it comes down to which side wins those possessions at the end of the game.

“We had a lead of four in the fourth quarter and then a lead of one but they were winning the possessions as they had a little bit better execution and we made one or two mistakes. We have already talked about those teaching moments.”

It was the home side who opened the scoring from downtown to lead 7-2 early on while GB struggled to find their range from deep.

They missed their first five 3-pointer attempts before Will Saunders finally connected as he scored five in a 7-0 run to give GB their first lead.

Netherlands replied with a 7-0 run of their own to re-gain control and a basket from Zak Wells would cut the deficit to 16-13 at the end of the first.

Clark certainly found his range at the start of the second with a trio of triples to fire GB into the lead at 23-21.

The lead changed hands a few more times as Paul Guede marked his return to the GB side with his first points from beyond the arc.

Rob Gilchrist tied the game at 28 approaching the final minute of the half before the Netherlands took the momentum into the break with the final eight points include a three at the buzzer to lead 36-28.

Netherlands increased their lead to 10 with the first score of the third before 3-pointers from Clark and Hart as well as four points from Alihodzic helped GB hit back to tie the game at 40.

Hart netted another triple to put GB ahead before the lead changed hands over the next few minutes. Guede had to level from deep and GB would then close with the final four points to lead 53-52 at the end of the third.

A third triple from Hart extended the lead to four points at 57-53 before the home side responded with a 10-1 run over the next five minutes to seize the initiative.

Clark fired in another 3-pointer after Okereafor scored through traffic to tie the game at 63 inside the final two minutes.

However, GB were unable to add to their tally as the Netherlands closed out the game with the final six points to earn a winning preparation for their upcoming 2015 EuroBasket participation.

GB will return to action tomorrow when they take on Portugal in their final game of the summer at 7pm (UK time).