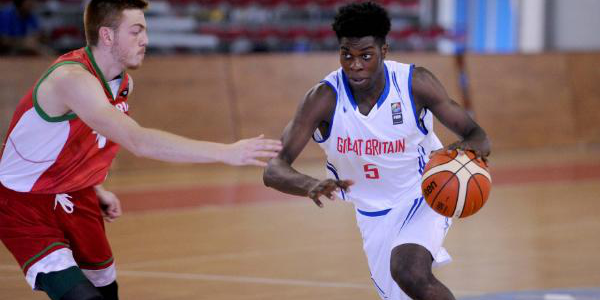 Great Britain under-20’s were unable to make it three wins in three days after being beaten 80-73 by Russia at the European Championships, in Italy on Wednesday.

Douglas Leichner’s finish 2nd in Group G and now need to win their next two games to guarantee their Division A survival.

They trailed by 20 at the half but battled back in the second half to close within five points with less than 3 minutes remaining.

Mo Soluade (pictured) top scored with 19 points for GB with Luke Nelson adding 10 and Kavell Bigby-Williams again narowly missing out on a double-double after posting 13 rebounds along with nine points.

Russia jumped out to a 10-2 start and then moved further clear with a 7-2 close to the opening quarter to move 24-11 ahead.

GB were unable to bridge the gqp in the second as their opponents went from strength to strength to take their lead above 20 points before settling for a 48-28 cushion at half-time.

When play resumed, GB began to launch a fightback and they outscored Russia 21-13 in the third to cut their deficit to 12, heading into the final quarter 61-49 behind.

GB opened the fourth with the first six points including a triple from Tamas Okros to make it a six-point game. Russia began to edge away again before Okros responded with an ‘and-1’ play and Soluade hit back-to-back 3-pointers to reduce the gap to five.

However, Russia were able to close the game out from the free throw line and boost their own chances of retaining their Division A status.

GB will learn of their opponents in the next round after the conclusion of Group H later today with three possible opponents standing in the way of survival.