Sam Newman out to make GB U20 final cut after breakout year - Hoopsfix.com 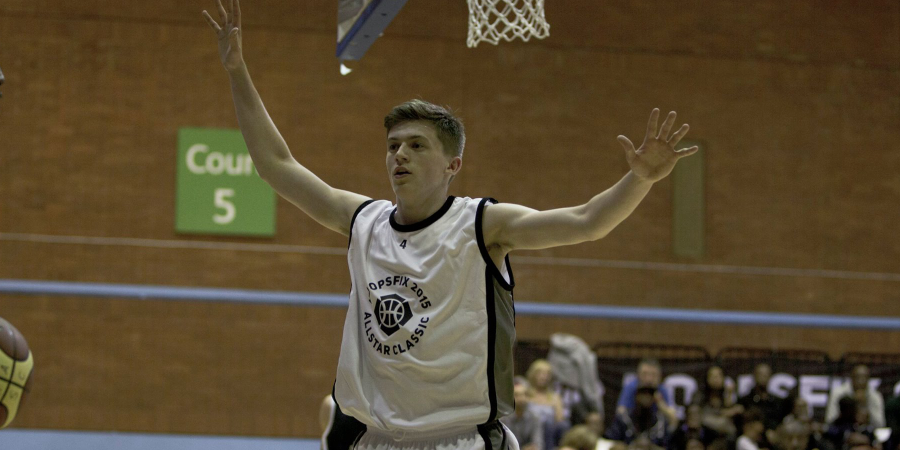 Sam Newman has gone from strength to strength in the past year with a number of accomplishments under his belt, and now he wants to add competing in a European Championship to that list.

“I’d say I’ve grown a lot in the last year, not just in basketball but as a person,” said Newman of his progression. “On court, the difference between this year and the previous years is dramatic, I play with more aggression and a desire to win.

“On top of this I believe personal change in mentality has helped me come as far as I have, basketball changed from a hobby to a lifestyle, I take care of my body and eat a lot better.”

And Newman is eager to convince Head Coach Douglas Leichner, and his coaching staff, that he deserves the chance to be on the plane to Italy as part of GB’s 12-man roster for the Euros after his ‘dream’ call-up.

“I cannot wait to make an impression,” he said. “The team is incredibly talented and we will all be competing like crazy to make that final cut. I’m going to go play my game and show why I should make the team.

“It was great to get my first call up,” added Newman. “It’s always been a dream since I started playing, but I had never been quite good enough to get recognition. I never expected the call-up – I just knew if I kept working throughout the year and bettering my game that I was giving myself the best possible opportunity to get selected.”

Newman was the MVP in the EABL after dominating the scoring with Copleston; averaging 30.3 points per game in 16 outings during the regular season. The 6’3″ guard led his side to a 15-3 record in the South Conference, but they would end up losing to Preston College at the Elite 8 stage.

As well as his EABL exploits, Newman also made his mark with hometown club Ipswich as they missed out on promotion to NBL Division 1 for the second season running.

“I think I’ve had an okay season,” Newman said of his performances. “IBA had a fairly solid record at the end of the regular season so things must have been going well. It’s just a shame we couldn’t take it all the way.

“Personally, it was a real honour to get the EABL MVP as the league is filled with so many great players. Getting the award would have been impossible without my team though – they put me in the best possible position for this year.”

And Newman is still coming to grips with having to leave Ipswich this summer as he heads to the States to begin his college career. Along with fellow GB U20 call-up Luke Mascall-Wright, the pair have been long mainstays with Ipswich as they have progressed through the academy.

“Ipswich has been my one and only team since I was 8 years old,” said Newman. “Growing up around the same people for 11 years is always going to be hard to leave.

“But the support everyone in the club has given me over the last year, and the words of encouragement, are just pushing me to make them proud. They’ll all still be there when I come home to visit which makes having to leave easier.”

LA awaits, and presents Newman with the next step in his career. The Golden Eagles finished with an overall 10-16 record last season, and Head Coach Dieter Horton beleives his new recruit will fit well into their system, and bring ‘needed scoring punch and versatility from the perimeter’ (via the Cal State website).

“I’m incredibly motivated and excited to start my college career at Cal State LA,” he said. “I hope to gain experience and learn a new style of play as it’s dramatically different to how we play in England.

“I’m sure with Coach Horton and the rest of the coaches around him that my game will continue to grow at the rate it has over the last season.”

Newman was one of four GB under-20’s selected to play in the second annual Hoopsfix All-Star Classic in front of a sell-out crowd at the Brixton Recreation Centre. He scored 8 points for the White Team in the 85-71 loss.

“HASC15 was great,” he said. “Both games were filled with such crazy talent. Getting to play alongside the best the country has to offer was brilliant and there’s nowhere else you can go and get that level of competitive play.

“It’s just a shame that the Black Team went off in the end and we couldn’t match them.”

The likes of Allen Iverson and Steph Curry have been the source of inspiration for Newman growing up, but admits his drive to succeed comes fully from the support and encouragement of his parents. And the teenager is already targeting areas to further improve his game.

“I’ve got a lot of areas that need improvement, a fair few of them are physical,” he admitted. “I took up strength training at 18, so I’m a few years behind where I need to be at.

“Shooting has always been a strength, but the coaches in LA noticed problems with my technique and form so the day pre-season started i’ve had to shoot with a strap restricting my thumb, it’s already improved accuracy, but there’s always room for improvement.”

GB U20 camp starts in less than two weeks, before a preparation tournament in Girona rounds off the month ahead of the European Championships.