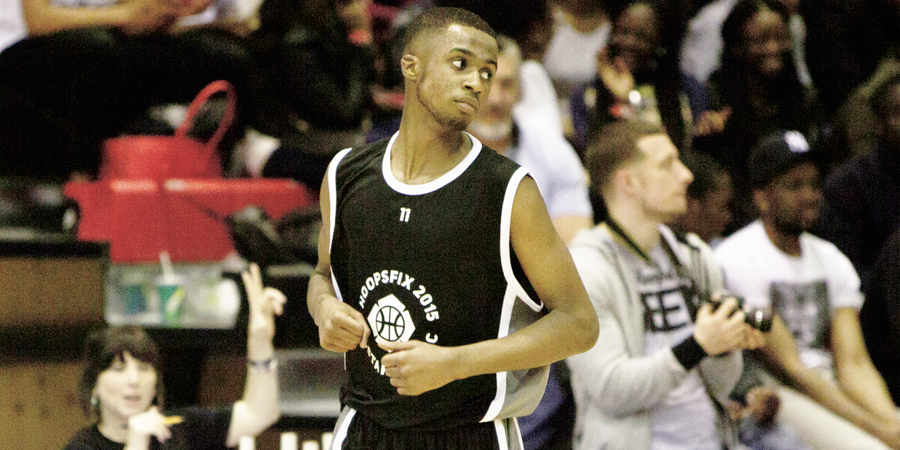 Kyle Carey shut down the Brixton Rec with an incredible dunk during his MVP performance that helped Team Black to an 85-71 win in the Hoopsfix All-Star Classic under-19 game on Saturday at Brixton Rec.

The England under-18 international shot 8-10 from the field, including a spectacular poster, on his way to 23 points in 23 minutes.

“It’s humbling to win the MVP award,” said Carey. “Especially as the talent level was so high. I just wanted to come out and play hard with lots of energy and most importantly, get the win.

“It was just so great to be a part of the event, and be recognised for all my hard work so to win the MVP was just even better.”

James Vear’s Team Black closed out the game in style with Carey and Liam Carpenter hitting big 3-pointers down the stretch in the middle of a clinical 16-4 run.

The White Team had been within two points at 69-67 with five minutes remaining, shortly after Carey’s dunk got the whole crowd off their feet.

Calvin Nevill-Kintu scored on the break from the tip and Kundrotas nailed from long range to give the White Team an early 7-2 lead. The rotation unit of Sedale Hanson-Young, Hamad Ali, Myles Laurent-Smart and Shaquille Walters all scored during a 10-4 close to the opening quarter to give the Black Team a slender 16-15 advantage.

The game was tied at 18 on a three from Josh Steel, before Vear’s side produced a run of 15 unanswered points including 8 from Carey. Alex Roberts ended the drought with a score from beyond the arc, to the evident relief of his coach Hopkins, before firing another from deep to book-end an 11-0 response from the White Team.

End-to-end action continued and the half came to an end with Roberts adding a simple lay-in just before the buzzer to help his side narrowly trim the deficit to just five points at 40-35.

Yeboah came out firing in the second half with an aggressive approach to pulling his team back into the game, and they soon tied it up at 44. Just after the Black Team threatened to pull away again, the combination of Roberts and Sam Newman put the White Team up 52-50 with back-to-back three’s.

The two teams were finely balanced, and an exciting finale was set up with the game evenly poised at 54-54 heading into the final quarter, which will long live in the memory.

Carey almost had the top play of the game early in the fourth. After seeing his long jumphshot emphatically blocked by Yeboah, the Preston College guard chased down his opponent for the block from behind, only to be called for a foul.

Jules Dang Akodo stroked in a deep three, before Yeboah knocked one down at the other end in an instant reply as the crowd grew into the game.

Then the whole arena erupted. After a loose ball scrap at the other end of the court, the Black Team came away with it and Carey led the fast break down the court, taking it to the basket at full speed and dunking all over Emmanuel Kabengele.

Spectators, including GB’s Ashley Hamilton, stormed to the court in the aftermath and the referee’s needed to take a time-out to let everyone try and calm down.

The atmosphere was electric, and Dang Akodo decided he wanted to shoot the lights out with another pull-up three coming immediately after Nevill-Kintu fired in his first triple. A basket from Williams made it a single possession game at 72-69 to the Black Team with little over three minutes remaining.

Carpenter nailed a three with 2:09 left, and Carey followed suit with the dagger to enable the Black Team to come away with the victory and draw a curtain on a fantastic day’s basketball at the Hoopsfix All-Star Classic.

Check out the full-game U19 replay: