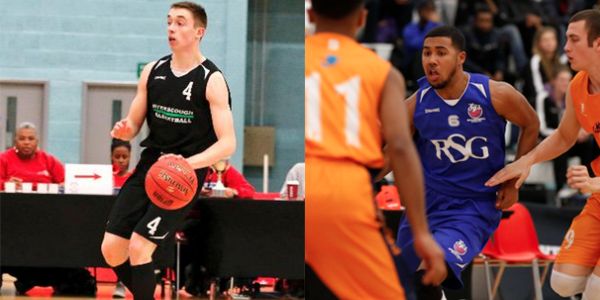 The 2015 EABL Championship game is set after Myerscough College & SGS College both came through their semi-finals at UEL Sports Dock, on Friday.

The two teams are the top seeds in their respective conferences and booked a fitting finale to the EABL season. Last year, they met at the Elite 8 stage with SGS coming out on top on that occasion on their way to a final loss to Barking Abbey.

Check out EABL’s recaps of the semi-finals including the full-game replays below:

Number one seed from the North, Myerscough College, became the first team to book their spot in the 2015 EABL Championship Final with a 66-59 victory over Charnwood College on Friday evening at UEL SportsDock.

Emmanuel Kabengele led Myerscough, coming up with key baskets all game to finish with a double-double of 22 points and 15 rebounds.

“All year he’s been a monster on the boards and I can’t praise him enough really. His physicality is outstanding, and he uses it and that’s rare to see. I’m really pleased for him.”

Kabengele had 16 points by early in the third quarter, and did all the dirty work for the Myerscough team.

“My coach told me I had one job to do which was to get rebounds and hustle plays, I came out doing that and it worked in my favour,” Kabengele said.

“First off, hats off to Josh Merrington, I think he did a great job scouting us and they blew up a lot of our sets,” added Hopkins.

“They put us in a position we haven’t been in before this year, which I expected. Charnwood gave it everything, made us work for every possession and were outstanding today. Fortunately we’ve got guys that can step up and make big shots at big times and once again the guys have come up with the goods.”

SGS College withheld a late rally from Preston to advance to the EABL Championship final for the second straight year with an 87-84 victory on Friday evening at UEL Sports Dock.

Dwayne Lautier-Ogunleye led SGS with 28 points, 7 assists, and 6 rebounds, but his squad gave up a double digit lead with four minutes remaining as the crowd got behind Preston who got it to a one point game in the dying seconds, but were unable to get over the hump.

“They got into foul trouble and I think we relaxed a little bit,” said SGS Head Coach Andreas Kapoulas after the game.

“They were pressing and we couldn’t get a way to get to the basket, we didn’t do a very good job of defending the lane and credit to them, they didn’t give up when they were down big.”

SGS advance to play Myerscough in the final, in what will no doubt be another exciting affair.

“We’ve got to play hard all the time, we had a little lapse and let them get back into the game,” said Lautier-Ogunleye, who has signed with NCAA Division 1 school Bradley for next season.

“Tomorrow, to get a win, we have to play SGS basketball like we have been all year. Play up and down with everybody contributing, because we’re a deep team, 1 through 12, so if we play our game we’ll be ok.”

The final takes place tonight at 6pm at UEL’s Sports Dock. Check back for the live stream.