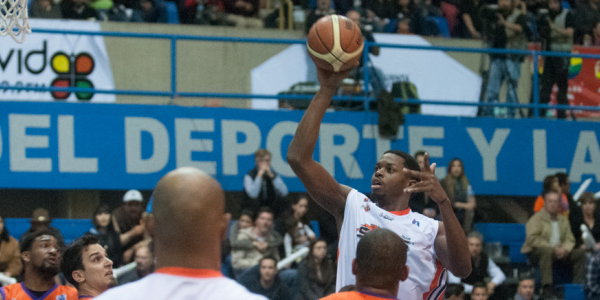 Matthew Bryan-Amaning battled through a stomach virus to lead Soles de Mexicali to victory as they established a 2-0 advantage in the Finals of the Mexican LNBP playoffs.

The GB forward produced a game-high 26 points on 10-15 shooting and had seven rebounds as Soles edged game 2 with an 81-80 victory over Pioneros to move within two games of winning the playoffs.

MBA has been dominant in Mexico this season; averaging nearly 20/10 for Soles with averages of 19.1 points and 9.1 rebounds per game in 41 appearances so far.

In the opening game of the Finals, the 26-year-old finished with a double-double with 25 points and 11 boards in a more convincing 85-70 win despite not being 100%.

MBA had already led his side to an impressive 4-2 series win over the top seeds in the semi-finals with Soles heading into the playoffs as fourth seeds following their 30-10 regular season record.

Following the Game 2 win, MBA uploaded a picture to Instagram showing he was hospitalised ahead of the encounter:

Pre game I was in the hospital post game looked like this…Today I can honestly say I gave it everything I had.. Had to play thru it because as a team @clubsoles we have one goal and nothing is going to get in the way of that..

Check out MBA’s highlights from Game 2 ahead of a pivotal Game 3 clash later today: