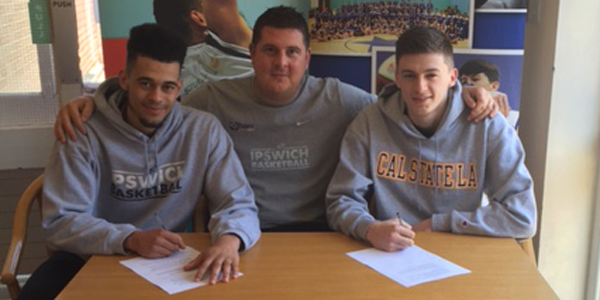 GB under-20 international Luke Mascall-Wright, and club team-mate Sam Newman, will begin their college careers next season after signing for US schools.

The duo have been playing together at Ipswich Basketball Club for over a decade, and impressed in NBL Division 2 this season as well as in the EABL with Copleston.

Mascall-Wright was part of the GB under-20 side that competed in Division A of the European Championships for the first time in 2014, and both players are eligible to compete this summer.

The duo are ranked first and third in the EABL scoring charts, with Newman leading the way with 30.3 points per game, whilst also ranking eighth in assists (4.8) and first in steals (4.6). The 18-year-old has enjoyed a breakout season, including a 52 point game and a 30 point quarter in the EABL.

“I’ve had a lot of interest this year and it’s been a great experience,” Newman said. “I chose Cal State because Coach Horton really sold the programme to me. I then went on a visit and it was game over after that. It felt like home straight away”.

Mascall-Wright has shown off his all-round game in the EABL with impressive averages in a number of different categories, and the 6’3″ guard has been on the radar of NAICC for some time.

“Its important to go to the right situation and not just the first place that shows an interest,” the 19-year-old said. “Coach Kyle Cooper from NIACC has been in regular contact all season, I visited in January and the place instantly felt right.”