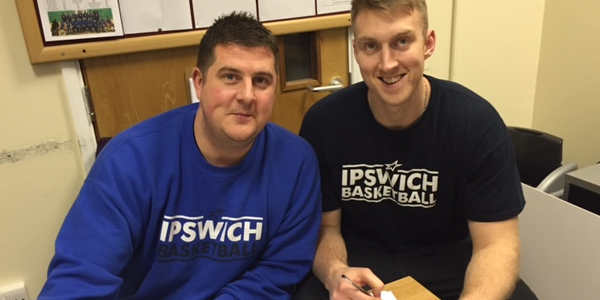 Ipswich Basketball have taken another positive step forward in their rise to prominence as a club after signing junior product Leigh Greenan to a professional contract.

Greenan, who has been a long-time servant at Ipswich, with a spell at Essex Leopards and short venture overseas in France added in-between, has penned a two-year deal and will continue on his scholarship at UEL. Though the term “professional” is used loosely in England, Head Coach Nick Drane did say it includes financial compensation but wouldn’t disclose how much. Regardless, Drane believes the news of Greenan’s deal is a ‘huge step for the club’.

“We’re delighted to have secured Leigh to a long-term deal,” he said. “It shows our ambition and we think it sends a good message to sign our own player who has been part of the furniture. He’s a product of the junior programme and a 7-footer of Leigh’s ability and talent would walk into most, if not all Division 1 teams.

“It’s not just about winning games, but keeping the brand going locally and Leigh will also play a big role for the younger kids as well. This is the result of plugging away over the years.”

The club is moving forward and continues to produce talent with a number of success stories coming out of Ipswich, a testament to the junior academy and AASE programme partnership at Copleston High School.

Dylan Johns has just finished his second year at NCAA Division 1 programme Texas A&M, while Ben Mead is at NCAA Division 2 school Franklin Pierce. On the coaching side, Matthew Harber left Ipswich to pursue his career at Loughborough and is now Head Coach of the Leicester Riders WBBL side and the England under-15 girls squad, while Adam Davies is at Canterbury High School (part of Kent Crusaders) and will serve as an assistant coach for the England under-16s.

“There’s a good infrastructure at a young age, and that has created a pathway to delivering fundamental skills. We are good at getting kids very young, because we have access to all the talented kids.”

As well as coaching the Senior Men’s team, Drane still plays an active role in coaching at a junior level, where none of the coaches get paid for their involvement at the club – including himself, although his full time job is the Head Coach at Ipswich Basketball Academy at Copleston where there is an overlapping of duties.

It doesn’t come without sacrifice. Drane has missed sports days, wedding anniversaries and other momentous family occasions in order to remain fully devoted to the club and the sport, and he paid special tribute to the club’s volunteers.

“You just can’t put a price on good volunteers,” he said. ” We have exceptional volunteers who would jump off bridges and run through walls for the club and that makes a big difference. It creates a culture of sacrifice and everyone is in it together.

“I still run the centre of excellence coaching sessions, and I love doing it because it keeps me rejuvenated.”

Historically, the club was primarily for women run by Bernard Ball – father of Oaklands College Head Coach, Michael Ball – until Drane began to start playing a major role in building the club from scratch, particularly on the mens side. And it was the end of his own playing career that allowed him to do so as an injury curtailed his career in the early 2000’s.

“I got injured playing at College at the University of Winnipeg in Canada, and by sheer luck, I got a job through the government run Active Sports Programme when I returned home. I began to run the Suffolk Basketball scheme and it enabled me to work professionally. The club was beginning to slow down once Bernard retired with only one team operating.”

Drane went on to set up a number of junior clubs in the local area; beginning to raise participation levels in the county. Over ten years ago, he became a community coach, teaching the fundamental basketball skills in primary schools before developing a Centre of Excellence through the same initiative.

“I’m very proud of the journey we’ve been on,” Drane said. “We had the vision of building a programme from the ground up to the senior team. Over the last four years, the partnership with the AASE programme at Copleston has really developed, and we were able to recruit Tom Sadler (retired pro) as a coach and he’s done a great job.

“The management structure of the men’s senior team has really kicked on over the last 12 months; from investing into the programme through fundraising events, big home crowds and game-day sponsorships which all creates revenue. And it’s all generated in-house, which makes it sustainable.”

On the court, the next step is to reach Division 1. Back-to-back third place finishes have halted Ipswich’s rapid rise through the National League ranks, although they were left feeling hard done by following last season’s confusion regarding promotion. Drane says they were led to believe that a third-place finish would be enough to go up as it was already known that Leeds and Bristol were heading into the BBL, but were left to battle another season in Division 2 even after runners-up Huddersfield Heat folded.

This season has just resulted in another third place finish for Ipswich with the two teams promoted from Division 3 going straight up with London Lituanica claiming the title ahead of Lancashire Spinners.

“It has been a frustrating year, but it’s a difficult division to get out of,” he said. “You have to remember we were in Division Four only a few years ago.

“The Lithuanian team were sensational and it was a pleasure to play them, and I feel like Lancashire Spinners are another ambitious programme who are doing the right things. Both of those teams came into the league this season and have gone straight up so there’s always teams looking to get out.

“We want to get into Division 1 and become competitive, but we will do it when we are ready and not just spend to do so – partly because we can’t do that anyway. I already feel like we have Division 1 level players and a Division 1 programme. In terms of profile, it would make a big difference for the club to get promoted.”

Ipswich duo Sam Newman and Luke Mascall-Wright, who was a GB U20 last summer, have impressed this season, particularly in the EABL with Copleston, and will become the next two in the line of products developed by the club to make their own way, with both expected to begin college careers next season. Drane describes the duo as ‘two of the best players in the country for their age group’ and is full of pride having witnessed two of his proteges develop over the years, every step of the way.

“It’s what I live for,” he said. “They were found through the community programme, and I taught Luke and Sam how to do a lay-up 11 years ago. I can’t put into words how much it means to me to see them develop as people and players. That’s the beauty of the programme.

“They’ve played for me at every age group, and I enjoy coaching them every day at Copleston Academy. We have provided the platform for them.”

And Drane is confident that the talent will keep coming in Ipswich with a successful junior programme able to continue to produce and develop the next generation of players.

“The talent is on a conveyor belt,” he said. “There will be two more after these guys and two more after that. I feel like we are an attractive club to play for, and for some of the guys just outside of the BBL, Ipswich will be a great fit.”

As well as looking to guide the senior mens side into Division 1, Drane also has high hopes of the women’s equivalent reaching the Women’s British Basketball League (WBBL), whilst targeting other improvements for the club in general with the need for bigger facilities high on the agenda.

“We are working against the tide in many respects with our geographical location and the fact we struggle to compete with teams in terms of facilities,” he said. “We are in desperate need of a bigger facility, with the greatest respect to Copleston. You go around the country and see some of the two-court facilities some teams have, and we’re still in the school gym, essentially.

“The senior women’s programme has got back on track with a new coach brought in making a difference, and our next target is to get the team into the WBBL in the next 3-5 years. Our junior programme is going well, so I want us to keep doing what we’re doing, but do it better.

“Personally, I’d like to get to a point where we start to professionalise coaches, even if it’s just part-time. The situation with Adam (Davies) was difficult, but there just wasn’t a job at Ipswich and you shouldn’t have to move town to get a job.

“There’s still work to do, and we are not anywhere near where we want to be.”