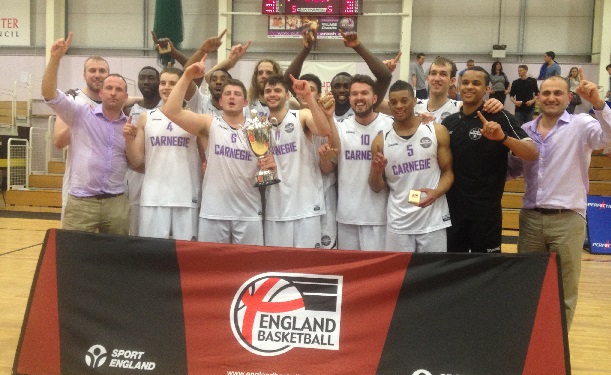 Leeds Carnegie had a perfect ending in Division 1, with a 71-65 upset win over treble winners Reading Rockets in the playoff final on Sunday afternoon at the Amaechi Basketball Centre in Manchester.

Jack Stannard was named MVP, bouncing back from a 2-17 shooting game in the semi-final, to come up huge when it mattered on his way to 27 points, 5 rebounds and 2 assists.

“I was just hoping it wasn’t going to happen twice in a row, it couldn’t have gotten much worse than yesterday,” said a beaming Stannard after the game. “I’m just pleased that the team won and I was able to have the impact that I had on the game.”

The victory is a likely a final swan song for Carnegie, who are making the jump to the BBL next season after having their initial franchise application approved last year.

“Extraordinary,” responded Carnegie Head Coach Matt Newby when asked how it feels to have won.

“God, we’ve come a long way since the beginning of the season. I’m not gonna lie it’s pretty emotional, that’s our last bite of it, given the future of the programme and where we’re going next. It just feels good to walk off the floor with the silverware.

“I think we underachieved earlier in the year and we learnt a lot of lessons from that. In fairness to the boys, they’ve taken a lot of heat over the year but the result stands and I couldn’t be prouder of every single player in the unit.”

Reading were the clear favourites heading into the game, having won every piece of silverware on offer in Division 1 so far this season, but Stannard and Leeds came up with big baskets every time they needed them.

With the game tied heading into the final quarter, Stannard had nine of his 27 in the period, including four free throws in the final 14 seconds to keep the game out of reach from Reading.

Reading kept their hopes of pulling off the quadruple alive with a 75-73 win over Bradford Dragons in the opening men’s semi-final of the day.

The game looked to be Bradford’s for the taking, after a dominant 14 point third quarter from captain Vance Silcott saw the Dragons pull away. Despite Bradford leading by 11 with 7 minutes left in the game and appearing in control, a furious rally by Reading after a timeout from Head Coach Manuel Pena Garces saw them storm back into the game.

Ivan Emanuely hit the go ahead layup with 9.2 seconds remaining to give Rockets the lead, before Danny Carter came up huge with a steal on the inbounds at the other end out of a timeout. Carted split a pair at the line before Nathan Ashley’s hail mary three at the horn fell short.

Josh Wilcher had 23 points, 7 rebounds and 8 assists to lead Reading, with Emanuely providing a boost off the bench with 16 points and Gabriel Diaz-Morero adding 12 points, 8 rebounds and 5 assists – including the dish to Emanuely for the game winner.

Silcott had 20 points in 20 minutes to lead Bradford, Jermayne Laing had 12 and Dan Foley added a 10 point, 10 rebound double double.

Leeds Carnegie upset Essex Leopards, 72-62, to book their place in the final against Reading on Sunday.

After a first half that saw multiple lead changes and no team be able to gain any ground, Leeds took control in the pivotal third quarter with an 11-2 run to open the half from which Essex were unable to recover.

“The game was tough and I felt that Leopards were relentless,” said Leeds Carnegie’s Head Coach Matt Newby after the game.

“We made some strong adjustments in the 3rd quarter and began to negate their offensive output. This coupled with outstanding industry on the boards and a stronger collective conscience on offence. I am really proud of the boys resolve and we now have to prepare for an equally stern test tomorrow.”