For Florida State forward Robert Gilchrist, Sunday’s marquee match-up against Syracuse will not only mark his senior night, but is also a must-win game that could be the difference between the Seminoles receiving a berth for the NCAA tournament or not.

Gilchrist’s FSU are now 9-8 in ACC play (18-11 overall) and sitting on the bubble. Beat the reeling Syracuse, who have lost 4 of their last 5, and people think it may just be enough to go dancing, lose, and it is believed that at least two wins in the ACC tourney will be required.

“The way we’re playing right now and the way Syracuse is playing, it’s just another college basketball game, anyone can win, we can come out and punch them in the mouth and they might not have anything to give back,” said Gilchrist in a call from Florida, an hour before practice on Friday night.

“They went on a 25-0 streak before they ended up losing, so they’re struggling right now. We’re on the turnaround and they’re struggling. This will be their fifth loss in six games if they lose to us, so there’s definitely a chance of anything happen and we think we’ve got a good shot of winning this game, for sure.”

Even if they do lose, Gilchrist feels the ‘Noles have as good a chance as anyone of making some noise in the ACC tournament to still get a spot in greatest basketball tournament in the world, March Madness.

“The ACC tournament is going to be very open,” he said assuredly. “This is college basketball, it’s weird like that, it’s not like American football where they say the team that has the best chance of winning is going to win. Anything can happen on the night.”

Playing in front of over 12,000 fans at the Donald L. Tucker Center on Sunday will be a far cry from Gilchrist’s humble beginnings in London.

Introduced to the game at 12 years old by his best friend Lukas Volskis (who now plays in EBL Division 2 with Eastside Eagles), the long armed athlete soon enrolled at Barking Abbey Basketball Academy in East London. He crossed the pond five years ago, played a year at Worcester Academy, MA, before enrolling at Polk State Junior College, and then signing with Florida State for his final two years.


He says he still sometimes has to take a step back to look at his life now to see how far he has come. Sold out arenas, playing against NBA talent, fans asking for his autograph and cheering his name, personal academic tutors and mentors, chartered planes, non-stop travel. Life can be good.

“Coming from England, no-one really cares about you unless you play football,” the 6’9″ forward said. “For me to come over and still be an amateur and people really invest their time and energy into supporting you as an athlete and everything you do, it’s really encouraging.

“I would encourage people at home with the talent in England to get over here as soon as possible and experience the things that I’ve experienced because it really changes your outlook on life. It gives you that extra push when times get tough, people will contact you and send you letters and stuff.

“Fans really do reach out to you and let you know that they still support you. They’ll send you stamped addressed envelopes so you can send it back to them after you’ve signed it. Especially at times like this when you’re not playing so well, it means a lot.”

Ah yes, the small matter of personal performance. Gilchrist is clearly disappointed with his own output so far at Florida State. His first season with the ‘Noles, his junior year, was a tough one, but things got better towards the end of the season, and the beginning of his senior year it looked like it was all clicking.

He opened up the season with a career-high 10 points against Jacksonville, he added another 10 in the second game of the season versus UCF. His numbers, and minutes, were solid.

But then his production stalled. He was pulled from the starting line up on the 10th February against Miami.

The ‘Noles have gone 4-2 in those games since, but Robert has seen more than five minutes in just two of those games.

His season averages of 3.5ppg and 2.0rpg on 45.4% shooting in under 15 minutes per game do not match the world of potential that can be seen in him.

He still remembers the challenging transition from JUCO to the ACC, being unable to no longer just rely on his raw athleticism and talent.

“It was definitely tough,” he continued in his English accent, one he has managed to keep despite five years in the US. “ACC basketball is arguably the best conference in the country, at this level all the athletes are top of the rung, this is as close as it gets to NBA athleticism. Transitioning from being able to just freelance and use my athleticism on defence. So I struggled a little bit with that, but when I found my way, I started doing a little bit better towards the end of the season.

“But I was a junior so I needed to be ready to go by the time I got here, so that was a little bit disappointing. As you’ve seen this year, I’ve struggled a little bit more, even though I’ve made progress, it’s not as much as I wanted it to be.

“We started out pretty hot with the regular season then we kinda tapered off. We got a few injuries, and people’s production went down; I was one of those people.

“I’d say towards the end of the season, about 23/24 games in I came out of the starting line up, my production wasn’t as good as it was before, and they made some changes. And that was when we went on a quick run to get some wins under our belt and keep the season alive. They stuck with that lineup and it’s been like that for the last 6/7/8 games and I’m hoping that this will get us where we need to go.”


Gilchrist knows the reason for his reduced minutes is lack of rebounding, but understands that the coach has to do what he thinks is in the best interest of the team.

“At this level rebounding is key,” he said. “It’s really what wins games for you. For someone like myself to be out there and not rebounding is almost like a travesty, having the kind of jumping ability that I have; if you’re not rebounding what are you doing?”

Gilchrist regularly left people in England in awe of his natural ability. There are very few players out of the UK that have his type of God-given talent to get people out of their seats every single time they play. What is stopping him from rebounding like he knows he is capable?

Regardless of the final numbers from his college career, one thing is for sure, Robert will get pro looks. He didn’t want to go into details but seems confident he will get high level offers.

“I’m sure I’ll have a shot at next year”, he said. “I’m pretty positive I’ll have a shot, both here and overseas. Playing at this level the connections are, I don’t want to say ridiculous, but they’re pretty up there. 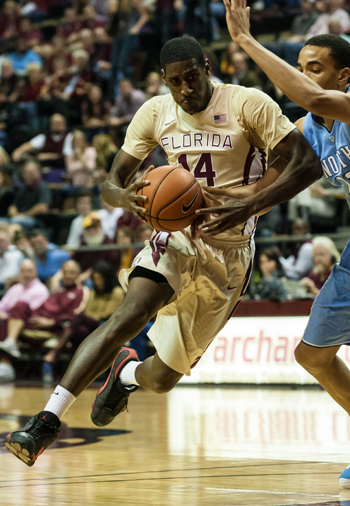 “Playing at an ACC school, playing under a guy like Coach (Leonard) Hamilton and everyone else on the coaching staff, they all have connections to people all over the world, so wherever I may end up I’m sure it will be at a decent level, because I’m still learning and figuring out the game. I got a long way to go before I reach my peak, so I’m excited.”

And will we get to see him suit up in a Great Britain kit before he takes to the court for what will almost certainly be his first professional season in 2014-15? Despite being inexplicably cut from the GB U20s in 2010, Gilchrist remains loyal to the national team and says he would love to suit up for the senior side.

Since seeing the GB party in Greece at the beginning of the season as they played EuroBasket warm-ups, whilst FSU were there on an international tour also facing the Greek national team, Robert says they have been in regular contact.

“It all depends what time allows (as to whether or not he can suit up for GB this summer). I’m sure I will do workouts over here as well as in Europe but I don’t know what time will allow me to get into, if time allows it then yeah I would love to, the sooner the better.

“Right now for me being able to get finished with school and play basketball as a job it’s definitely exciting for me and I’m excited to get into that.”

He speaks regularly with the likes of Andrew Lawrence, Matthew Bryan-Amaning and Drew Sullivan for advice and to discus basketball as he begins thinking about the next step in his career.

As with any athlete who moves abroad, of course, his hometown London can cross his mind, but with a potential March Madness appearance and future pro career in the pipeline, there is little to complain about.

“Yeah, I suppose I miss the city. Just little things like being able to jump on a train and be on the other side of London in no time stuff like that,” he concluded. “But I’m chasing my dream, so I don’t really think about it too much to be honest.”