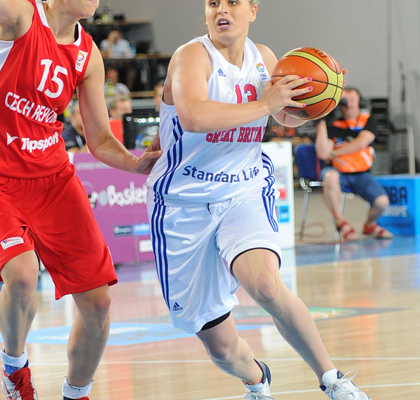 Savannah Wilkinson, Jay-Ann Bravo-Harriott and Jo Leedham have been named England Basketball’s Player of the Year in each of their respective categories.

Cheshire native Johannah Leedham was chosen as the Senior Women’s Player of the Year and looking at the statistics, it’s not surprising.

The 1.76m shooting guard led Eurobasket Women 2013 in assists per game (4.5), three point field goals attempted (5.5) and made (2.2) and she was also amongst the tournament top ten in free throw percentage, free throws attempted and made, double-doubles and points per game.

Leedham is playing her national league basketball in France with Bourges.

Haringey Angel guard Jay-Ann Bravo-Harriott was selected by coach Len Busch as the U18 Women English Player of the Year.

Bravo-Harriott led England in scoring, assists and steals and she finished in the European Championship (Division A) top ten in free throw shooting, both percentage and free throws made.

Coach Busch said, “Jay-Ann is a talented guard who will surely play a part in Senior GB teams. By the end of our tournament she was demonstrating the type of guard play of which she is capable.”

Savannah Wilkinson may not have topped the scoring charts but her 8.1 points and 8.3 rebounds per game showed a consistency much appreciated by head coach Karen Burton. “We believe that for consistency on the court and her maturity she shows off court she is the ideal candidate for the award,” said Burton.

Wilkinson had 10 rebounds in each of her last three games and her biggest game saw her record a 14 point, 10 rebound double-double in a 64-63 win over Belarus.

Congratulations to all the winners!