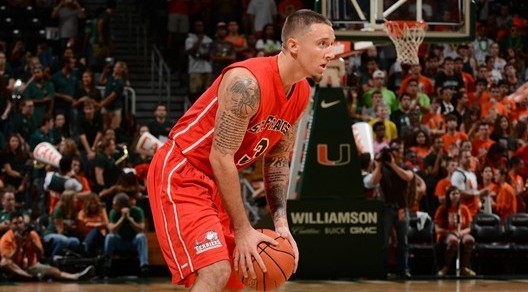 Will Neighbour, who recently passed a milestone, scoring one thousand points at ULAR, was held out of the team’s last two games due to an injury. We are currently trying to get some more information about that. We do know that he sprained his ankle late in a game against South Alabama, where he scored 23 points and grabbed nine rebounds.

However he did play in the next game two games but performed below his usual standard then hasn’t played in two games since. All four games were losses, which saw UALR go from second place in the Sun Belt Conference standings to fifth place.

Neighbour is now the sixth Trojan to record 1000 points and 500 rebounds.

Another player who has recently hit the 1000 point plateau is Duquesne’s Ovie Soko, who also has over 600 rebounds and counting.  Soko’s team Duquesne are only 3-9 in the Atlantic Ten standings but the senior transfer is the reason they are not bottom of the conference as they were predicted to be in the preseason.

And the final one? Ben Mockford (pictured above), who also his the four digit mark in a loss to Central Connecticut State.

Without further ado we present a roundup of the best performances of the British players in the NCAA basketball, division one, since last week Thursday.

Ben Mockford | St Francis NY | senior| Guard
It was third time lucky for St Francis as they played a rare three games over the week and only won the third after losing the first two by a combined three points.

First up was their rival, LIU Brooklyn, where Mockford scored 17 points, grabbed two rebounds and dished out an assist in a one point loss.

Then in a game that was previously postponed, Mockford scored 18 points to go with two rebounds in a two point loss against Central Connecticut State. He went for 6-for-10 shooting from the field, including 6-of-9 from three-point range. Mockford went over the 1,000 point mark for his career and the Iona transfer now needs just 20 more to hit a grand in a Terrier uniform.

In the third and only road game, St Francis (NY) was victorious over St Francis (PA) with Mockford being the leading scorer with 16 points.

The 6’2” guard made a whopping 56% of his three point attempts in all three games.

Then in a six point win over Marshall, on Thursday, he scored a dozen points to go with six rebounds. The 6’10” centre was perfect from the free throw line making all six of his attempts.

Chuku had 10 points, seven rebounds, an assist and two blocks which wasn’t enough to help Lehigh get by Holy cross on Saturday.

Two days later he would score 14 points and grab six rebounds in a loss to UNC Ashville.

They received minimum contribution from Luke Nelson, who scored two points, on free throw attempts as he missed all five of his field goals, dished out five assists and grabbed four rebounds, as they blew out UC Riverside on Saturday.

Almost a week later, the freshman, previously named the Big West Player of the week, scored a dozen points to lead UC Irvine in an overtime victory over Hawaii. He also had two rebounds and an assist.

Ovie Soko, currently tied for third in scoring and sixth in rebounding in the Atlantic Ten conference, had 19 points and 12 rebounds in a victory over Rhode Island on Saturday.

In a loss to St Bonaventure, on Wednesday, he scored twelve points and snared eight rebounds.

Adam Thoseby tied his season high, scoring 16 points, in a victory over Nebraska-Omaha on Thursday. The 6’5” guard also had three rebounds, a block and a steal in the one point victory.

Previously he played only a dozen minutes, recording a point and a rebound even though South Dakota prevailed in a game with IUPUI.

Michael Ochereobia started the week fouling out with two points, seven rebounds, three blocks, an assist and a steal in a loss to South Dakota on Saturday.

Then he had 14 points and eight rebounds against Denver on Thursday, which was another loss.