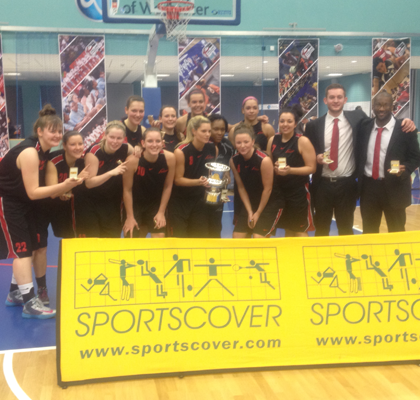 Leola Spotwood hit a 12 foot jumpshot at the buzzer to give Team Northumbria a 66-64 win over Cardiff Archers and claim the 2014 National Cup at Worcester Arena, Worcester on Sunday afternoon.

It is the first National Cup title for Northumbria, and came against an opponent who they had been defeated by twice this season.

Northumbria’s Spotwood was named MVP as she dominated to the tune of 30 points and 10 rebounds, whilst captain Diana Voynova also had a double-double with 16 points and 18 rebounds.

The teams went head to head throughout much of the game, featuring 12 lead changes, but Spotwood came through when it mattered most.

“As someone once told me, that once you see the ball go in, it’s gonna go in,” said Spotwood of her game winner. “When I had the ball in my hands, I’d already seen it going in the basket before I put it up and so it happened to go in.”

“I think our girls just persevered,” said Northumbria Head Coach Josh Merrington. “We started the game well, Cardiff went on a run, but we stuck with what we were doing.

“…It’s huge for us a programme; we want to be a programme like Cardiff, like Sheffield, that’s regularly competing at the top of the league, that’s our aim. We don’t want this to be our defining moment for the season, we want to build on this from now on and make it a regular occurrence.”

Cardiff guard Jess Jenkins put on a show for the Worcester crowd, going 7/15 from beyond the arc to finish with 26 points and her teammate, player/coach Stef Collins had 17 points, 13 rebounds and 5 assists.