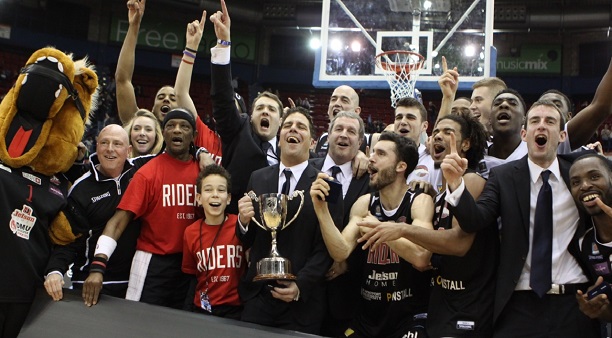 Leicester Riders repeated as BBL Cup Champions, with a shock 72-69 come from behind victory over Newcastle Eagles at the NIA, Birmingham on Sunday.

They were led by Drew Sullivan, who took over down the stretch, scoring 11 over the last 4 minutes, as Riders overturned an 11 point deficit to steal the game from Newcastle, who led for over 36 minutes of the contest.

“To be honest with you, I’m kind of upset with myself that I didn’t do it a little bit earlier,” said Sullivan, who was named MVP, finishing with 16 points and 10 rebounds. “The game might’ve been a bit different. I think I play with a bunch of guys who do trust me and when we’re in situations they want me to try and take the game over.

“The last five minutes or so, Jay came over to me and was like ‘Sulli, you gotta take over,’ we need you to win, so over the last 5 minutes of the game I was a lot more selfish and tried to get the basket to score.”

The Eagles’ Paul Gause fouled out with 6 minutes left and it proved to be a turning point as Newcastle scored just 4 points from there on out.

Charles Smith scored 27 points in the losing effort, whilst Cousinard led the Riders with 18.