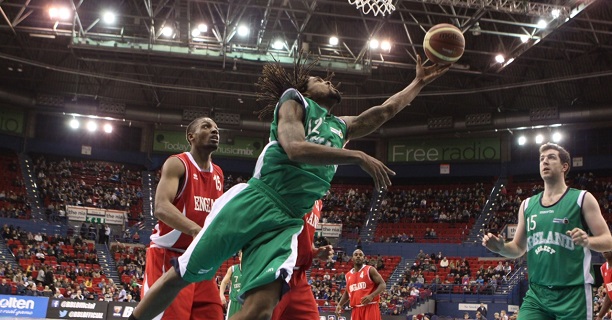 Delwan Graham scored 21 points to drive Ireland Select to a 75-66 victory over England Select as the side from the Emerald Isle won the BBL Cup Final day curtain raiser for a second straight year.

Ireland trailed for much of the contest this time but showed greater composure down the stretch to secure victory with Darren Townes’ emphatic dunk in the last 45 seconds putting the exclamation point on the success.

England had earlier taken control of a tight first quarter when Stefan Gill inspired an 8-0 run that gave them a 24-14 lead. But Ireland responded and Kieran O’Brien beat the period buzzer with a tip in to pull it back to 26-22.

The lead was soon back up to double figures in the second quarter when Louis Sayers hit back-to-back three pointers to make it 34-24.

Trailing 44-36 at half-time however, Ireland made a determined start to the third period and were back within three at 49-46 when Martins Provizors completed a strong ‘and-one’ play.

Ireland’s first lead followed with three minutes remaining in the quarter. But England regained the advantage when Rob Marsden scored in the post with the final action of the period to give England a 57-56 edge.

McGinn set up Townes for his big dunk, which made it 71-66, before stealing from Gill on the other to all but end England’s hope of a comeback.

Nick George was England’s top scorer with 16 points in defeat.