England Under-18s were crowned 2013 Haris Memorial Tournament champions after defeating Manchester Magic, 58-47, in the final on Sunday afternoon at the Amaechi Basketball Centre.

Josh Steel was named MVP, leading all scorers with 17 points, 10 of which came in the fourth quarter as he held off the Manchester surge, along with 8 rebounds, 3 assists, and 5 steals.

“It feels great (to win the tournament),” said Head Coach Karl Brown after the game. “The main thing I’m happy with is how the guys played on the defensive end, and they played every game from the first minute to the fortieth minute. There were a lot of impressive performances, but we’ve still got a long way to go before the European Championships next year.”

Deane Williams, who was impressive throughout the final, finishing with 14 points and 12 rebounds, hit a basket at the end of the opening quarter to give England the lead that they would not give up for the remainder of the game, despite multiple Magic rallies. 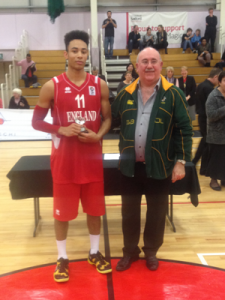 Steel (pictured, right) took over in the final period to seal the title, adding 4 rebounds, 3 steals and an assist over the 10 minutes.

“He’s a multi-talented young man,” said Brown of Steel. “He’s a ’97 and he just does everything. He handles the ball, he’s a leader on the floor, plays great defence; is long, and he attacks the rim and can hit the jumpshot.

“There’s still more that he can give – he’s had a bad foot so we had to sit him out in the semi-finals, so he came back and led us from the front today.”

Overrall, Brown is feeling good about the England u18 squad that is being assembled for next summer.

Dwayne Lautier Ogunleye, who along with Deane Williams was named to the All-Tournament team, added 8 points.

Manchester were led by 14 points, 6 rebounds, 3 assists and 4 steals from their All Tournament team member, Pharroh Gordon.

England U18 vs CB Cornella (semi-final)
England Under-18 responded well to an early challenge from Cornella, coming out 68-54 victors to book their place in the final.

Cornella jumped out to a 6-0 lead, but England responded with a 23-4 run of their own and held the lead for the remainder of the game.

Joe Junior Mvuezolo led England with an 18 point, 13 rebound double double, with Dwayne Lautier-Ogunleye the only other player in double figures with 14.

Marti Sanchez had 13 for Cornella, as they dropped into the third place playoff.

Magic U18 vs Akademie Weser (semi-final)
In the game of the tournament, Manchester Magic came back from 14 points down with just over 6 and a half minutes remaining to beat Akademie Weser, 70-58.

Magic looked dead in the water as Ponfick hit a shot to give the German team a 55-41 lead with 6:33 remaining, but Pharroh Gordon took over, scoring 16 points over the remainder of the game to send the home crowd into a frenzy and book his team’s place in the final.

Gordon finished with 23 points to lead Magic, whilst Erwin Nkemazon had 15 to lead Weser.

Leonard Ponfick had 13 points to lead the German side, whilst Keno Pape added 11 points and 15 rebounds.

Cornella were led by 14 points, 9 rebounds and 3 assists from Damia Paez.

Kyle Carey had 16 points for the English, with Alex Roberts, Denzel Ubiaro and Brad Wood adding 11 each.

The team from Switzerland were held winless throughout the tournament, as Manchester’s two wins came against them.

Moses Silweya had 25 points on 10/13 shooting to lead Magic, whilst Zurich were led by Jan Sedlacek’s 22 point, 13 rebound double double.

England U17 vs Zurich
England Under-17s had little trouble dispatching of Zurich, winning 114-31.

Kyle Carey and Alex Roberts had 22 points each to lead England, who had 35 steals, as Zurich turned the ball over 44 times.

Magic U16 vs Sligo
Sligo All-Stars came away with a 65-56 win over Manchester Magic Under-16s.

Cian Lally had 21 points and 15 rebounds to lead the Irish side, with Manchester being led by Ayo Nuwe’s 13.

Thoughts? Did you make it to the tournament?