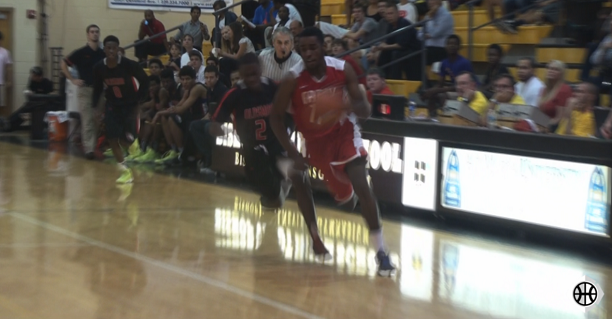 GB Regional Institute of Basketball, Barking Abbey, turned heads today at The City of Palms Classic this afternoon, taking down Oldsmar Christian 47-45 with a huge come from behind upset.

Oldsmar Christian have no less than 8 players with scholarship offers, 4 of which are heading to high major D1 schools, and were 10-1 coming into the City of Palms. To say that anyone in the gym (except BA) thought BA had a chance of winning it would be a huge understatement.

Trailing the majority of the game, and by 8 with 4 minutes left, BA kept at it, to come through when it mattered most.

Watch the final minute – with Josh Steel sinking the three after a nice find from Joe Lockwood to tie it up, and then Dwayne Orija coming up huge with a steal and layup to take the lead with just under 26 seconds left, before Reis Pinnock comes up with a steal to seal the win.

GB U20 Lockwood had 17, 5 and 2 on 7/8 shooting, whilst England U18 Steel finished with 16 on 6/9 shooting, as Barking Abbey finished in third place in the City of Palms Classic Signature Series.