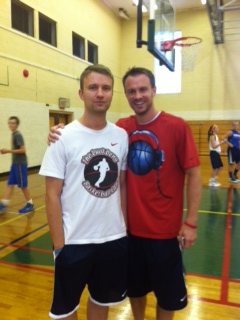 Former Medway Park Crusaders Head Coach, James Vear, continues with his blog from overseas (University of Dalhousie, Canada). Vear left the UK about two months ago, and will be regularly updating us with his experiences and life abroad. You can check his first blog entry here, and second one here. Over to James:

So, it’s been roughly a month since my last entry, and a lot has happened – it was nice to see so many people comment on the last blog with lots of great points made.

Pre-season has officially started for us and we’ve just finished our third week. We started off with walk on try-outs the first week of Sept, and with 31,000 students at Dalhousie, they always have a good turnout!

We already had 16 players we knew of on the team depth chart and we decided to take 3-4 of the walk-ons to begin our first full week of practice. Our first week involved a lot of teaching, especially fundamentals, and trying to get players up to the speed of university basketball – which for a lot of them was a bit of a shock compared to the High School basketball they had played the year previous.

We currently practice 6 days a week with most sessions lasting 2 hours 30 minutes. We also train at 6am on a Tuesday, which, although has taken a bit of getting used to, have been amongst our best practices so far. This has really pushed the players out of their comfort zone and we can see which ones are taking pre-season seriously.

In our first week we also put the team through fitness testing to see which players are basketball fit (which most basketball players will know, is a lot different to just being fit). We were a little disappointed with some of the results and told the players that we expect their results to improve dramatically over the next couple of months.

The first week also gave me a chance to see Coach Campbell work practice; I knew immediately I made a great decision to come here and learn off John. He is a great coach and in the first two weeks alone I filled up two note books with our defensive & offensive philosophy and drills! I would love to go into this a lot more with specifics, but you never know if some of our rival coaches are reading!

Being the first assistant I have been tasked with looking after all the player’s individual workouts outside of practice time. John has also given me the first hour of Friday’s practice to myself so I can continue to develop as a coach, something I look forward to every week.

I’ve started doing personal coaching workouts to local high school players which I really enjoy. The kids who I currently coach work as hard as any players I have ever coached, and it’s great to see youngsters here so dedicated to getting better each week in preparation for their club and school seasons.

At the end of our 2nd week I was invited to go and watch a clinic put on by Alan Stein. If you don’t know who Alan is, he is regarded as the world’s best basketball strength and conditioning coach and has worked with some of the world’s best players including Kobe Bryant and Kevin Durant (find out more at http://www.strongerteam.com/)

It was great to see Alan work and I picked up a bunch of ideas and drills from the weekend. I also got to spend some time with Alan, talking hoops and the possibility of him coming to England one day which hopefully I might be able to help organise. It was nice to talk to him about a mutual friend and coaching mentor to me, Don Showalter, who is the coach for the USA National under 17 team, someone who we both admire for what he has done in basketball throughout his career.

One thing I have noticed since I’ve been here is the amount of coaching clinics readily available. In Halifax there is a big sporting complex called the Canada Games Centre (the Toronto Raptors will be holding part of their training camp there next week which I’m hoping to go along and watch), where once a month they hold clinics that are not always basketball specific but are for coaches to go along and listen to speakers talk about various subjects – entirely free!

The one I attended last week spoke about over training and depression in sport, it was a really interesting insight into the problems and stresses of elite athletes especially at the University level. At our University we also had a day long clinic put on by staff at the Canada Games Centre about various sporting subjects which gave all of our coaching staff some good ideas for the upcoming season.

All of the speakers work with current Canadian Olympians and it was great to see the amount of detail that goes into all the work they do at the centre. I think this is something that as a country we need to get better at and making clinics a more important part of coaching development – I think I have only been to 2 coaching clinics in England since I started coaching!

This past week the team has now been whittled down to 15 and we have decided to keep it around this number for the rest of the season. This next week will be an important one for us as we prepare for our first pre-season games in Ottawa, where we will play current National Champions Carleton Ravens, coached by legendary Canadian Coach Dave Smart and two other CIS Schools.

Next week our Women’s Varsity team play Calgary, who are coached by GB basketball coach Damian Jennings. Me and Damian have had similar coaching opportunities open up for us over this past season, so we have organised to meet up after the game and catch up. I will be sure to update you with everything next month!