Doin' It In The Park Comes to London - Hoopsfix.com

Support
Home / Blogs / Doin’ It In The Park Comes to London

Doin’ It In The Park Comes to London

Doin’ It In The Park, the documentary chronicling New York City pick up basketball, arrived in London on Tuesday night, with the first ever UK screening taking place at Aske Gardens in Shoreditch.

You may remember seeing the trailer on the site a few months back, and at the time it was unclear if we were going to see it here in the UK.

Luckily, thanks to the Nike Flyknit Festival (it’s running until this Saturday, defo worth a little look), yesterday the UK exclusive screening took place. At the last minute I managed to get myself down there to check it out – and boy, am I glad I did. 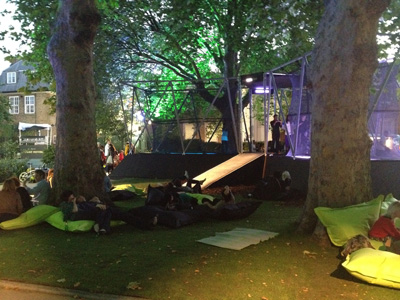 Nike have decked out the gardens with a DJ booth, displays of the Nike Flyknit shoes, lighting displays, bean bags to lay around on, and trampolines(!) – and that goes without mentioning the basketball court (that already existed) and free food and drink they put on all night!

Before the screening, a 3 v 3 basketball tournament took place in association with ’48 Ballers – a group of hoopers that play at the park every Sunday. Midnight Madness, featuring Taner Adu, Mantas Drungys and Karolis Stepanavicius ended up taking the title in what was one of the more physical tournaments you’ll see in the UK (some of it you could hardly call basketball!).

After the trophy presentations, the screening took place. A projecter screen was rolled out in the middle of the court, and bean bags and mats were laid out for people to chill on and watch.

The film is the brainchild of Bobbito Garcia and Kevin Couliau, both of whom have basketball backgrounds – something that really came through in the film. Telling the story from the beginning of New York City pick up basketball, it gives an insight into the entire scene, ranging from the history, the culture, the clothing (do not wear NBA jerseys!), to trash talking, prison hoops, women ballers and more.

It is a true love of the game type documentary that saw Garcia and Couliau visit over 180 courts throughout NYC’s five boroughs to create the film. They traveled to a majority of the locations by bicycle, carrying camera equipment and a ball in their backpacks – playing pick-up on every court they visited in the process.

When the film finished (to a big round of applause), Garcia and Couliau did a little Q & A session, with Couliau describing shooting the film as the best experience of his life, as they answered questions about everything ranging from the borough that had the best basketball (Bobbito said it was even) to the processes that went into making the documentary.

If you love the game, you need to see this film! The pair are still looking for a distribution deal, which they are hoping will happen after the premiere at a film festival at the end of September.

Check out a few bad quality pics of the night from iphone below, and make sure you keep up to date with Doin’ It In The Park on Facebook.