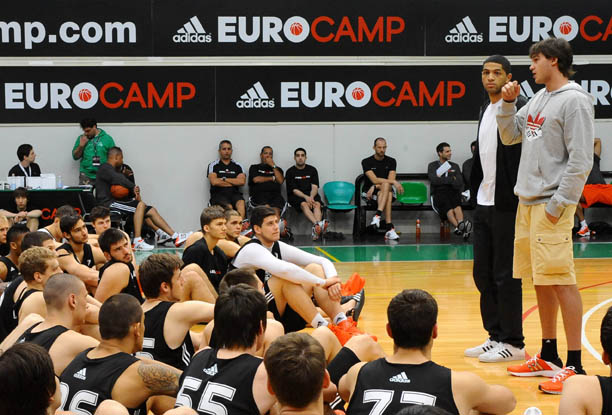 The 2012 adidas EUROCAMP was wrapped up on Tuesday in Treviso, Italy, with the players going through drills, guest speakers before 5 on 5 game play.


The one player who seems to have created the most buzz for himself at the 2012 adidas EUROCAMP is France’s Rudy Gobert. Only present as a result of France’s U20 side being invited to compete, he impressed the gym with his length (Draft Express measured him with a 7’9″ wingspan!) and mobility, completely owning the paint.

The MVP of the 2012 adidas EUROCAMP was named as Oleksandr Lypovyy. The First team was named as Darko Planinic, Tornike Shengelia, Daniel Diez, Evan Fournier, and Tomas Satoransky, whilst Paul Lacombe received the Hustle Player award and Artem Klimenko received the defensive player of the camp award.

Find all the box scores and stats from the day’s games below:
Russia vs Australian Institute of Sport
Team 1 vs Team 3 (running clock)
Team 2 vs Team 4 (running clock)
adidas EUROCAMP All-Stars vs France

What the Web is Saying