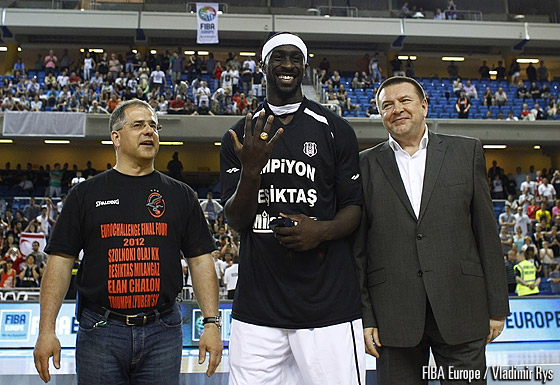 Great Britain star Pops Mensah-Bonsu is no doubt ready to go for the Olympics after helping Turkish club side Beskitas to the EuroChallenge title as they beat Elan Chalon 91-86 in the final at the weekend in Debrecen.

Mensah-Bonsu recorded a huge 26 point, 20 rebound double double in the final game to be named MVP, and has now topped that off being named Eurobasket.com’s EuroChallenge Player, Forward, European Player and Defensive Player of the Year(!).

The awards came on the birthday of the late Joe White, Pops Mensah-Bonsu’s former coach and mentor at Hackney. On hearing he had received the honours, Pops tweeted:

on the birthday of my late, great, mentor Joe white, i was fortunate enough toreceive all of these awards. eurobasket.com/EuroChallenge/…

In the final, the ridiculously athletic Londoner went 8/16 from the floor, 10/13 at the line, whilst also adding 1 assist, 1 steal and a block. He averaged 18.5 points and 11.8 rebounds per game throughout the EuroChallenge (see his player profile here) and was amongst the leaders in a number of different statistical categories.

The EuroChallenge title can be added to the Turkish Cup Bestikas won earlier in the year.

You can check out what Pops had to say after winning the EuroChallenge below, and see a couple of his dunks from the Final Four here.


Massive shout out to Pops representing the UK to the fullest!
Image Credit: FIBA Europe/Vladimir Rys