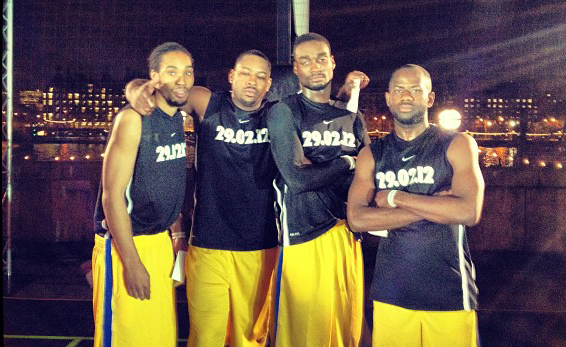 The tournament, played on a temporarily constructed court in one of the most iconic locations in the country, with Big Ben and the Houses of Parliament as the backdrop, saw 6 teams battling through two pool games, before advancing to the semi-finals and final stages.

With music playing into the night, a good crowd, on-court lighting and food, Nike once again proved they know how to run an event.

Midnight Madness’ Nhamo Shire a.k.a the Voice of Reason was on the mic, and thought it was the perfect way to start the summer:

“Beautiful location; Big Ben in the background, City Hall, London Eye…amazing. Kinda got us ready for summer basketball, so I’m itchin’ right now! I know it’s only February but I’m looking forward to summer a lot. It was a great tournament.”

And was he happy Midnight Madness won? He didn’t front; “Course I am,” he said, before flashing his trademark smile.

Hoopsfix, featuring NASSA’s Perry Lawson, Derby Trailblazers’ Rishi Kakad, Brixton Topcat Samuel Toluwase and Westminster Warriors young’n Samson Oyediran, rolled through their two pool games before drawing a struggling Midnight Madness team in the semi. The physical contest went to quadruple overtime, with clutch play after clutch play (and controversial call after controversial call!) dragging it out and forcing the game to be decided on sudden death threes.  Darrell Bethune stepped up first for the Madness team, hitting, whilst Rishi came up short sealing our fate.

A worn-down Midnight Madness went on to play MVP in the final, where they scraped out a one point win to take the title.

Did you make it down? What do you think?