First Look at Pops in a Hornets Uniform as Training Camp Opens - Hoopsfix.com 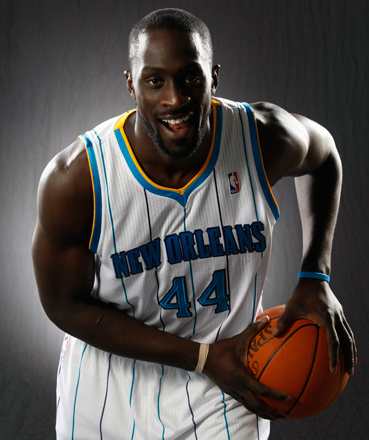 It's a good look!

The New Orleans Hornets held their annual media day on Monday, with local and national press getting their first chance to sit down and get better acquainted with the 2010-2011 roster. As a part of that, all members of the team go through their official team photos which gives us our first chance to take a look at Pops Mensah-Bonsu rockin’ the New Orleans Hornets uniform.

Training camp opened on Tuesday, where Pops will battle it out to make the final roster-a position he has been in before. In a recent interview with MVP, he explained;

“It’s a great opportunity but I’m not going to get too far ahead of myself, I’m 27-years-old now and I’ve been at this stage before. I’m a bit older and wiser. But I have a chip on my shoulder and when I played for GB in the summer, it definitely helped that I was playing with a bit of anger. It made me focus in a little more and it made sure I brought the same intensity to every game. I just wanted to show the best of my abilities. I did that this summer. And I want to continue to do that.”

“It’s a very good chance but I feel like in the past, my chances were just as good.”