Bristol Academy Flyers came away with a hard fought win yesterday, beating Manchester Magic 63-63 in OT to win the finals of the National Cup. 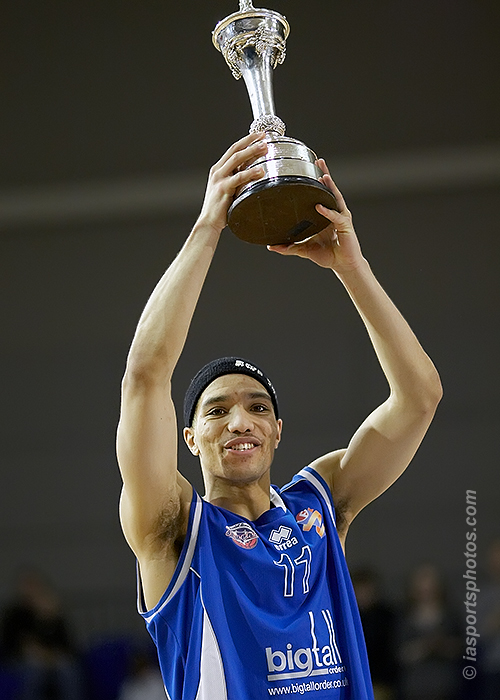 It wasn’t the prettiest game with both teams shooting horrendous percentages (Manchester 33% and Bristol 29%) but it meant an exciting end at the EIS Sheffield.

Stefan Gill scored a floater to break a tie, giving Magic a 57-55 lead with just over a minute left in the game. The next minute followed suit with rest of the game; a series of misses from both teams until with 1.9 seconds left on the clock the Magic’s Yann Fasbender fouled Doug McLaughlin-Williiams on a 3-pointer, sending him to the line for the potential game winners.

He missed the first, but made the second two to leave the game tied at 57 with the ball in Manchester’s hands. After a time-out, the Magic ran a perfectly executed inbounds pass, the floated over everyone into the hands of Stefan Gill, Bristol managed to just get their in time contesting the shot, which rimmed out sending the game to OT.

It appeared as though Bristol wanted it a lot more than Manchester showing a lot more hustle throughout. England U18 Josh Houghton opened up the scoring in OT with a drive and layin to put Manchester up by 2. The score then went back and forth until Bristol’s Anthony Berry was sent to the free throw line and made 1 of 2. Manchester secured the rebound but a bad pass from Gill turned the ball over back to Bristol with just over a minute remaining. Berry then hit a jump hook in the paint to give Bristol the lead 62-61. Houghton missed a step back jumper with 35 seconds remaining giving the ball back to Bristol. After a series of offensive rebounds, Berry was sent to the line with the chance to extend the lead to 3 with 10 seconds remaining. He cracked under pressure, missing both but but a huge offensive rebound by McLaughlin Williams gave Bristol another possession, leaving Magic forced to foul Jack Stannard. He made the first and missed the second, it was rebound by David Watts, outletted to Gill who threw up a prayer but was blocked by McLaughlin Williams as the buzzer sounded.

Manchester Magic were led by Stefan Gill’s 28 points, 11 rebounds and 4 assists (not to mention 8 turnovers and 11/30 shooting from the field!) and David ‘Tintin’ Watts’17 points and 8 rebounds (again on a pretty horrendous 7/22 shooting from the floor).

You can see full stats of the game here