Dan Clark: 'We believe we can make some noise at EuroBasket' - Hoopsfix.com

Support
Home / National Teams / Dan Clark: ‘We believe we can make some noise at EuroBasket’

Dan Clark: ‘We believe we can make some noise at EuroBasket’ 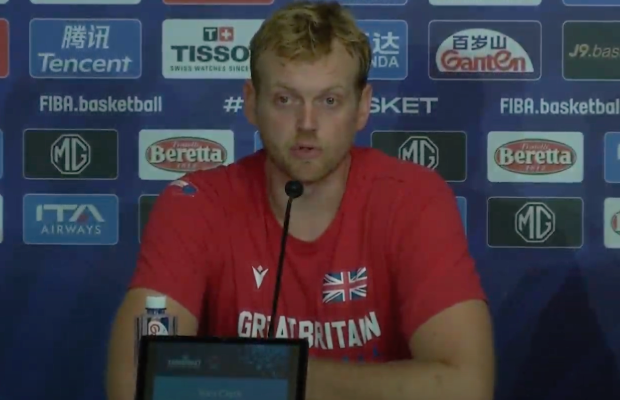 Great Britain’s Senior Men’s co-captain Dan Clark believes the team are confident they can make their mark at FIBA EuroBasket 2022.

Nate Reinking’s side are in Milan, Italy for the group phase with their opening game against Ukraine on Friday.

“We’re really excited to be here,” began Clark in the pre-event press conference. “It’s big occasion for us, a big event.

“We’ve got an extreme belief that we can make some noise at EuroBasket 2022 – and that starts tomorrow against Ukraine.”

Greece are amongst the tournament’s favourites to come away with a medal, while Group C hosts Italy and Croatia will also be expected to advance to the knockout stages. That potentially leaves GB fighting Estonia and Ukraine for the final spot in the Round of 16.

“I think it’s clear on paper who the favourites in our group are in terms of the bigger name teams in European basketball,” said Clark. “But after that, I think it’s very much up for grabs for those last two spots, or last spot, to qualify for the next round which is our main objective.”

Check out how you can follow GB’s progress at EuroBasket and watch every game, HERE.

For the full pre-event press conference, watch below: