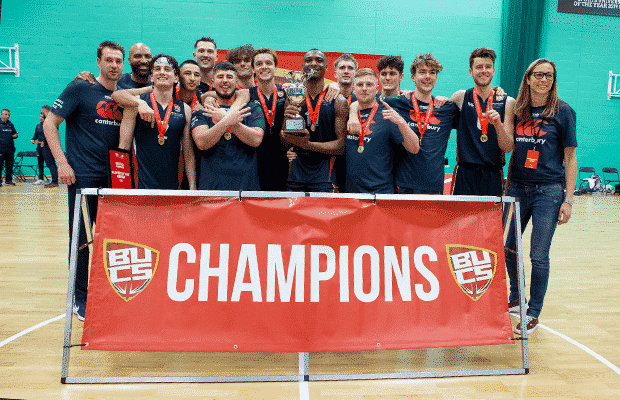 Newcastle University have won their first ever BUCS Championship title, defeating Durham 79-74 in the final on Wednesday in Nottingham.

Trailing by four at halftime, Newcastle rallied with a dominant third quarter, opening the period on a 14-4 run led by MVP David Moya, who finished a rebound shy of a triple double with 14 points, 9 rebounds and 10 assists.

“As finals very often are the game was a little nervy and tight, just waiting for one team to get going,” Newcastle Head Coach Mark Elderkin commented.

“We had a huge defensive third quarter and John Cork provided a giant spark off the bench. It’s our first team ever winning the BUCS championship and something we will remember forever.”

Ronald Blain led six Newcastle players into double digits with 17 points and 12 rebounds, Brandon Federici had 14 and Cork had 13 and 9 off the bench, as Newcastle only ran a 7-man rotation.

Dante Langley had 24 points to lead all scorers for Durham, with Levi Lamb adding an 18-point, 10-rebound double-double and Christian Fioretti having 11 points, 6 rebounds and 6 assists.

Chris Jones added 8 points, 13 rebounds and 5 assists for Durham, who were unable to gain vindication for a cancelled 2019-20 season final that they were heavily favoured to win.

“It was a tough loss but I’m really proud of the growth and character of the team,” Durham Head Coach Ian Hewitt said.

“We stuck together throughout the 40 minutes and created enough opportunities to win the game but credit to Newcastle, they got it done in when it counted.

“It’s also bitter sweet for me personally, it was great to see Newcastle and a good friend lift the trophy. But I’d have loved to have seen our team and especially Chris Jones, who’s gave years to the university, get that experience.”