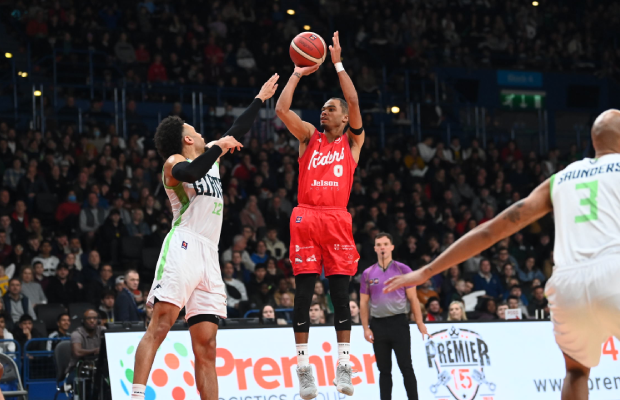 Leicester Riders won their third BBL Cup title after overcoming a slow start to beat Manchester Giants 83-69 at the Utilita Arena in Birmingham, on Sunday.

Geno Crandall led the way in an MVP display with a 26-point haul as the Riders celebrated their first Cup success in eight years.

Josh Steel provided the early spark for the Giants with half of their opening 12 points in a bright start with Dan Clark splashing a three from the corner to earn an early six-point lead.

The GB co-captain struck again from downtown as Manchester made life difficult for their opponents in the opening stages as the lead reached nine points. However, Leicester went on a 9-2 run across quarters to tie the game at 20-20.

Contentious calls at both ends increased the tension with both teams looking to get the crowd pumped up. Riders seized the initiative in a pivotal spell as Conner Washington hit a three, Crandall made back-to-back stepbacks and Zach Jackson’s drive made it a double-digit game for the first time.

Crandall then converted a tough and-1 and Darien Nelson-Henry hit a fadeaway at the buzzer to give their side a commanding 45-28 advantage going into the half-time break.

Manchester rallied after the interval and were soon back to within single figures as threes from Tarik Armstrong and Jordan Whelan bookended an 8-2 burst. However, Marc Loving responded with a tough finish through contact to halt the momentum and the lead was 60-51 at the end of the third.

Every time the Giants got back to within nine points, the Riders had an answer and Crandall came up with successive scores to make it 70-57 with 5:27 left on the clock. Steel connected from deep in hope of launching one last comeback, but Kimbal Mackenzie hit back with two of his own to make it a 14-point cushion with 2:45 remaining.

That proved to be decisive as the Giants’ late surge was not enough with Leicester celebrating winning yet another BBL title.