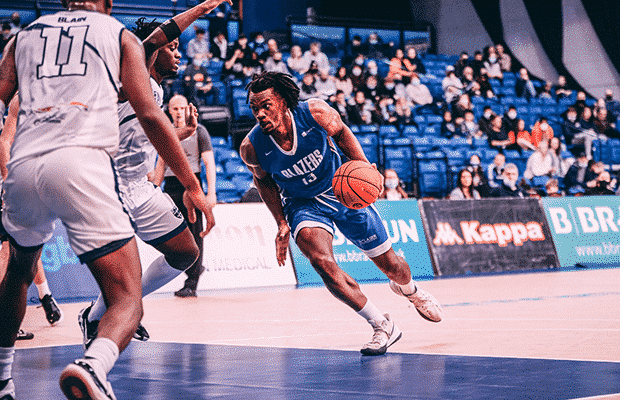 Derby Trailblazers claimed the 2022 L Lynch Trophy title with an 86-71 win over Team Newcastle University on Sunday in Sheffield.

Derby – who were playing in their first NBL final since 2014 – had answers for every Newcastle run, being led by a 30-point, 18-rebound double-double from American Malcolm Smith who picked up MVP honours.

“I’m really proud of the guys,” Derby Head Coach Matt Shaw said after the game. “I thought defensively we were excellent. They’re a really good team we knew if we could hold them to less than 80 we had a really good shot at winning and we were able to do that today. We made everything tough for them, really pleased for the guys.”

“It means everything. We wanted to come in and just play hard for the fans, play with energy and I ended up almost getting 20 rebounds. I’m just trying to play hard, and help the team in any way I can. The fans deserved it and we wanted to give it to them.”

Brandon Federici finished with 24 points to lead Newcastle, while Ronald Blain was stifled into 6-of-18 shooting for his 15 points.

A 14-0 run sparked by Blake Bowman and Malcolm Smith sandwiched the end of the first quarter and saw Derby take a 13-0 lead which they would never look back from.

Smith was dominant in the first half, finishing with 17 points to give Derby a 46-37 lead at the break.

Federici knocked down a crucial three at the third quarter buzzer to pull Newcastle back within nine, 67-58, but Newcastle were fighting an uphill battle.

Despite Newcastle pulling back to within 6 down the stretch, back to back threes from Bruggeman and Rhaeem May Thompson with two minutes left put Derby up 13 and snuffed out any chances of a Newcastle comeback.