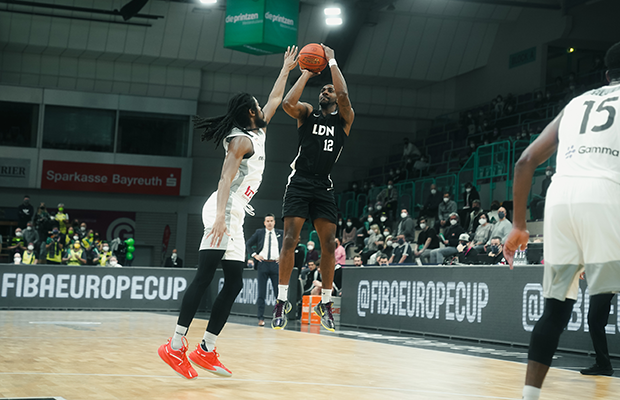 London Lions fell to their first defeat in the FIBA Europe Cup with a 97-78 loss to medi Bayreuth on Wednesday night in Germany.

Having already secured their ticket to the second round last week after a 5-0 start, Lions needed a victory or a less-than-11-point loss to lock up the top spot in Group A, however, finished second and will now head to the next phase – which tips off Dec 8 – in a considerably harder group.

A high octane first quarter saw the two sides go blow for blow behind 16 points in the period for Dirk Williams, but it was the second period meltdown which ultimately saw Bayreuth head into the locker room with a 16 point lead that Lions would struggle to chip away at in the second half.

Williams was unstoppable on his way to a 30-point outing, missing just 3 shots, whilst Isaiah Reese had 19 points, 6 rebounds and 8 assists. No other player joined in them in double figures.

They now face off against Avtodor Saratov (RUS), Bahcesehir College (TUR) and Bakken Bears (DEN) in the second phase.