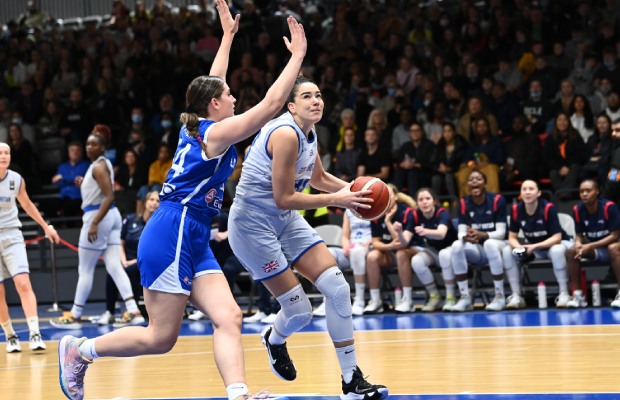 GB Senior Women began their bid to make a EuroBasket return with a 66-73 defeat against Greece in their qualifying opener in Manchester, on Thursday evening.

Chema Buceta’s side were left to rue a late third quarter lapse as a late fightback came up short in the Group G encounter between the top-two seeded nations. GB were also without star player Temi Fagbenle, who suited up but did not play.

Karlie Samuelson top scored with 14 points with Shanice Beckford-Norton adding 12 points on debut. Azania Stewart marked a first cap out of retirement with a double-double of 10 points and 11 rebounds along with two blocks.

Fellow GB debutant Holly Winterburn got the start in the back-court and it was Rachael Vanderwal – also making a GB return – who netted a corner three after Samuelson had opened the scoring. But Greece edged ahead to take a 15-20 lead after 10 minutes and capitalised on second-chance opportunities.

Beckford-Norton provided a spark off the bench for GB with speed and energy to quickly move into double figures with Samuelson’s outside shooting keeping the hosts in contention. They would trail by one at the half at 33-34, despite Greece’s 1-of-9 shooting from three-point range.

Samuelson’s tough drive put GB ahead when play resumed and the sharpshooter made it 38-37 with an equally tough three. However, the turning point came as Greece put together an 11-1 run to take control of the contest.

The gap had increased to nine points with GB trailing 45-54 heading into the final period. Their task was made tougher as they fell 13 points behind before mounting a late fightback, largely through Chantelle Handy’s triples.

Greece held their own and despite a three from Georgia Gayle making it a five-point game, the final margin was seven – which could prove significant in head-to-head scenarios.

GB now head on the road to face Estonia this weekend before trips to Portugal and Greece follow in the next window in 12 month’s time.