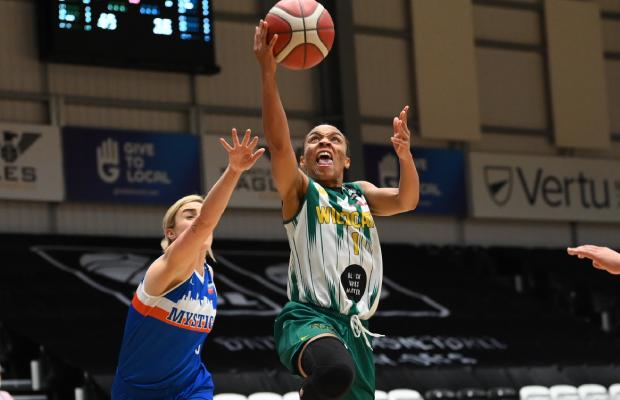 London Lions and Nottingham Wildcats will meet in Friday’s semi-finals after coming through their WBBL playoffs openers, on Sunday.

A repeat of the WBBL Trophy final will take place in Worcester as the two sides joined Sevenoaks Suns and Newcastle Eagles, who advanced on Saturday.

Here’s a recap of the two last eight ties:

Nottingham advanced to the semi-finals of the WBBL playoffs for a fifth time with an 80-64 victory over Manchester. The three-time runners-up led by as many as 19 in the contest as they established early control and never looked back.

Manchester hit two threes out of the gates, but would miss their next 11 attempts in the first quarter with Tia Freeman netting one off the bench for the Wildcats to put them 21-10 ahead. Dom Allen picked up two early fouls, but Hannah Shaw worked away inside to great effect and soon moved into double figures.

However, the Wildcats had doubled up their opponents at 30-15 and would take a double-digit lead into the half-time break. Manchester were unable to put a telling run together as Kenrick Liburd’s side kept pace with timely baskets to lead 59-47 after three.

Helen Naylor helped bring the Mystics within seven at 61-54 behind, but Chelsey Shumpert took over with 15 of 26 points in the fourth to takeover and make sure of the win. Simone Costa finished with 20 points with Moa Lundqvist adding 16 points and 15 rebounds as the European duo starred early on.

The Lions overcame a slow start with a second quarter blitz to defeat Essex 92-65. Kennedy Leonard finished with 22 points, 16 assists along with eight rebounds and eight steals to mark the club’s first win in the WBBL playoffs since April, 2015 – 2212 days ago.

Both teams struggled to find their range early on in a tight game. Essex were winning the battle of the boards and five points in a 6-0 run from Ashleigh Munns put them 12-16 ahead before Cassie Breen’s first triple edged London in front at the end of the first quarter.

Carla Bieg’s three put the Rebels up four, but the Lions turned defence into offence in a devastating spell with threes from Breen and Leonard in the middle of 16 unanswered points. Angel Waithe stopped the rot, but all of a sudden they trailed 46-33 at half-time.

The damage appeared to be done and the Trophy winners edged the third quarter to narrowly extend their advantage of 14 points heading into the final period. Essex fell 21 points behind, but rallied with a 9-0 run before a late burst from the Lions to win in style.