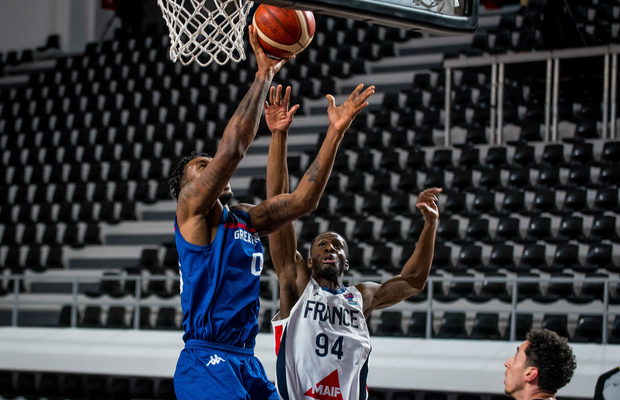 Great Britain’s Senior Men enjoyed one of their finest wins with an impressive 94-73 triumph over France in their final qualifier.

Marc Steutel’s side had already confirmed their spot at EuroBasket 2022 on Saturday, but rounded out their campaign by avenging their heavy loss to the world number six ranked side.

GB led by as many as 23 points – which was the same margin in defeat in their previous meeting against France, who had beaten Montenegro two days earlier as testament to the strength of their roster, despite being without several star names.

Ovie Soko put up 27 points on 9-of-11 shooting from the bench with Myles Hesson adding 23 points with the duo both playing for clubs in France. Meanwhile, Saturday’s hero Luke Nelson weighed in with 12 points as all 12 players saw minutes on the court.

Teddy Okereafor opened with a three to mark his record-equaling 49th consecutive GB appearance, while Bristol team-mate Ben Mockford also fired in from beyond the arc to cap a 13-5 start. GB continued their early momentum to quickly establish a double-digit advantage they would not relinquish.

The gap kept growing in the second quarter as GB used a 13-0 run to cement their control with Dan Clark. GB’s lead peaked at 23 points late in the half and while France threatened a fightback in the second half, they were no match for Steutel’s side.

Soko finished with a flourish, following on from two huge dunks from Tarik Phillip as GB put on a show in Podgorica.