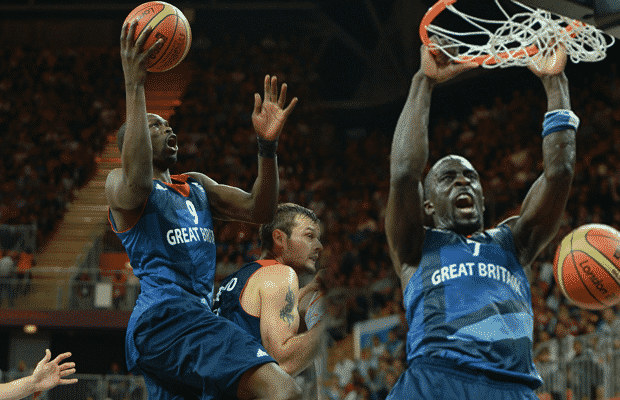 Two of British basketball’s biggest stars have left a damning indictment of the sport’s administrators in the UK during an Instagram live session.

Luol Deng and Pops Mensah-Bonsu have revealed how they felt under-appreciated, not included in any decision making, and were not happy with the lack of involvement of people in the Great Britain program – particularly the coaching staff – who could connect with the players, whilst Mensah-Bonsu disclosed he was rejected from an application to get on the board of Basketball England last year for not being ‘qualified’.

.@Pops reveals he applied for a role on Basketball England's board last year and they told him he wasn't 'qualified'. 😳

The duo have been doing weekly episodes of #DENGPOPSCHAT, a series of conversations chronicling their careers, with Monday night’s episode covering the state of British basketball and reflecting on the London 2012 Olympics with Great Britain.

Luol warned things were about to get ‘spicy’ before saying he felt the need to address the issues the British game is faced with on behalf of a number of other people who ‘have had to deal with this side of things for a long time.’

“There was a few things along the way that I didn’t like,” Luol said reflecting on his involvement with the GB programme – ran by the British Basketball Federation – in the run up to and during the London 2012 Olympics.

“I just think that basketball was never appreciated. We didn’t have the pull behind us. We didn’t get the credit for what we did for that programme and to take it to that level and when it came down to decision making, I felt like we were never a part of it.

“But also still to this day, my biggest regret, is there should have been more coaches from the inner city, people that knew how to connect with the players better, than people from outside. People didn’t understand the passion behind it and how bad we wanted it. And the people that were in charge were putting people in position that didn’t necessarily love (it), they only loved the part where they were getting paid.

“It wasn’t coming from the heart. For us, it came from the heart, we wanted it not just for us but we wanted it for the youth, for the program, for uplifting the whole program. I felt like we had enough talent to change the course of basketball in the UK.

“Today, I feel like, whether it was purposely done and it’s still being purposely done, I feel like, you know what you gotta do in order to make British basketball better, but it’s almost like it’s being avoided or there’s always a reason why it’s not being done.

“The biggest reason for it is, the majority of kids that are playing basketball are black kids. The majority of time when you go represent the UK, it’s kids from the inner city. A lot of times we were going to Manchester, we were going to Newcastle, and there’s nothing wrong with that but we felt that there were people that knew us better that were never part of the GB programming and they understood us best. And that’s where I look back and wish I spoke more about that.”

Deng also said he had a meeting after the Olympics with British Basketball Federation staff members to discuss the direction he feels the programme needs to take, only for nothing to be actioned.

“How can I have a camp every year in England, I don’t ask for funding, I do the whole camp myself, because I want the kids to experience the opportunity what it’s like in the States. I asked GB, I said, yo, you guys needs to be part of this camp, not because I want money or anything, but all these kids needs to be excited and to be inspired by all these basketball players that have a similar background to them and are representing the country they came from.

“Not one time, not one time, did I get GB to be part of it, or do the camp with me. That’s when I knew, yo, they want me to play for them but when it comes to helping the kids and helping the inner city kids they weren’t showing up. And that’s why I started going in the other direction until now.

“I’m all about helping GB. If they come right now, I’ll sit down with them and help them but they have to listen. In order to get better they have to put the right people into basketball.”

It was around May of 2019 that Pops applied for a co-elected board position with Basketball England.

“And they sent an email back saying I wasn’t qualified.

“…I thought it was a no-brainer. You (Basketball England) don’t have anybody who’s played the game, anybody who knows the game, and now you have somebody who not only has all the above, but is one of the few who has played in the NBA and wants to be a part of this and you’re telling me I’m not qualified.

“I almost washed my hands of the whole situation, but again, if I did that, think about everyone else we’re hanging out to dry and forgetting about. For them to tell me I wasn’t qualified, just shows me how things are going and why things are the way they are.”

Basketball England confirmed Mensah-Bonsu applied for a board position but were unable to comment further.

Speaking on the wider state of basketball in the country, Pops said:

“..The culture is so fragmented, everybody is so separate that we can’t come together and help these young kids get to the next level. There’s so much talent there but the resources and the infrastructure is not put in place. And this is England we’re talking about, this isn’t a third world country, this is England and the united kingdom of Great Britain.

“We’re talking about one of the most developed places on the planet, one of the strongest economies in the world, and you’re telling me we can’t have a bridge or an avenue for young players to play the game and then go live their dream out playing basketball?”

“My whole thing is, we want British basketball to get better, don’t even want anything from it, but i really want to give opinions on what direction it should be taking.

“It’s frustrating when you have France doing so well, other European countries doing so well, now Canada’s doing so well and all of them are voicing opinion of former players or people who have came through the ranks or the same background.

“There’s a lot of people we should be vouching for that should be involved with GB basketball because I know their heart would be in the right place, and there’s people that are doing it everyday but they are not being given the resources and opportunities to do it. So I want us to push on that. That’s just my thing with GB.

“For me, obviously I’m not playing anymore, but I’ll do my part in making sure that we keep encouraging these kids but also help them.”