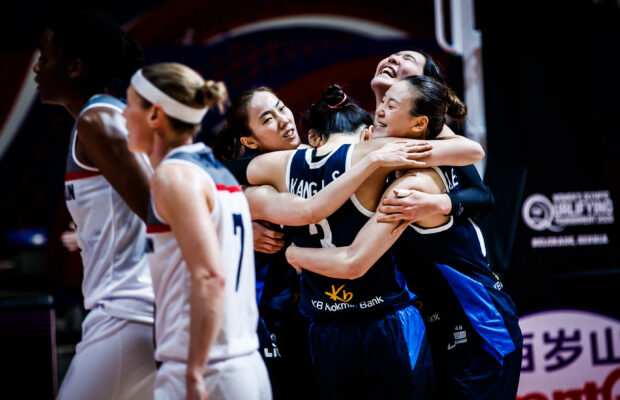 Great Britain’s Senior Women must now beat reigning European champions Spain in their final game at the Olympic Qualifying Tournament in Belgrade, after suffering a 79-82 loss to Korea.

Chema Buceta’s side would have sealed a historic trip to Tokyo 2020 with victory – following China’s 64-62 success over Spain – though they still have their fate in their own hands.

GB came from 17 points down in the fourth to set up a tense finale before Korea held on down the stretch to boost their own chances.

Temi Fagbenle finished with a game-high 28 points along with six rebounds and five assists with Jo Leedham-Warner adding 21 points and 10 assists for a double-double.

Leedham-Warner set the tone on the very first possession, hitting the open three as part of the first six points of the game. Korea finally got going with back-to-back triples in an 8-0 response and their outside shooting helped maintain control as they started 5 of 7 to lead by eight.

Defensive pressure from Georgia Jones and debutant Kristine Anigwe allowed an easy score from Leedham-Warner to cut the gap to 19-25 after 10 minutes.

However, the threes kept pouring in for the Koreans with Leeseul Kang starting 4 of 4 to help establish a double-digit cushion at 21-31. GB switched out of the zone defence and limited their opponents’ options in the midst of cutting the deficit in half as Leedham-Warner sank a three. Korea began to profit from second chance opportunities and when Kang struck gold with a fifth 3-pointer, all of a sudden the lead was out to a commanding 16 points. With Fagbenle sat on two fouls, GB needed something from their guards and Samuelson stepped up – bouncing back from an 0-3 start to go 3-6-9 from the exact same corner spot to help trim the deficit to 37-45 at the break.

Korea found more success from outside at the start of the second half with Leedham-Warner leading the charge at both ends to keep the deficit in single figures. However, GB struggled to contain their opponents in order to bring themselves closer and went into the final 10 minutes facing an uphill battle, down 54-70.

It looked a long way back for GB as they trailed 61-78 with 6:28 remaining. Leedham-Warner knocked down another three with Samuelson following suit as they sparked a remarkable 18-2 run capped by back-to-back scores from Fagbenle to make it a one-point game.

A key defensive stop was followed by a costly turnover with Korea going two from two from the line to lead by three and GB were unable to come up with a three for overtime as they came up short.