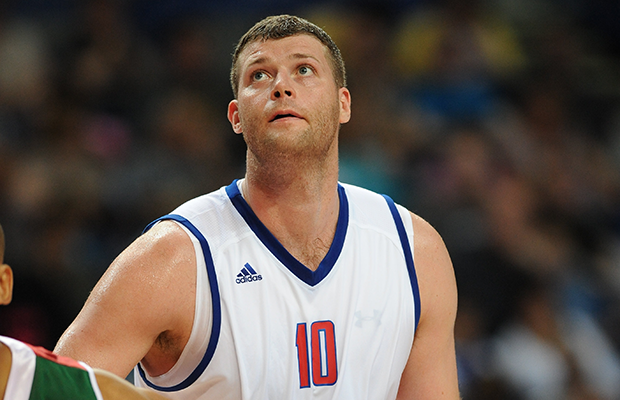 Former Great Britain centre and the only Scotsman to ever play in the NBA, Rob Archibald, passed away on Friday at the age of 39.

The 6’11” big man had a successful professional career and represented GB for six straight years from 2006-2012, collecting 46 caps which culminated in suiting up at the London 2012 Olympics.

Starting his career with Dunfermline Reign where he won two Scottish titles, Archibald headed to the US to attend Lafayette High School for his Senior year, where he won a full scholarship to NCAA Division 1 school Illinois – qualifying for 3 trips to March Madness and reaching the Sweet 16 as a starter in 2002 – before being selected by the Memphis Grizzlies with 32nd pick in the 2002 NBA Draft.

Stints with Memphis, Phoenix, Orlando and Toronto in the NBA followed, before carving himself a successful career in Europe, predominantly in Spain, but also having played in Italy, and Ukraine – where he won the Ukranian Superleague and Cup in 2008, whilst also securing the Finals MVP. He played 4 seasons in the Euroleague; one year each with Scavolini Pesaro and Joventut Badalona and two seasons with Unicaja Málaga.

He retired in 2012 after the Olympics with GB. He had career averages of 6.2 points and 4.2 rebounds in 37 appearances for GB, with an international career-high of 23 points against Switzerland in 2007.

“He was a fantastic ambassador for Scottish and British basketball and will be fondly remembered for his great contribution to the game in our country, his talent and his achievements.”

“The news of Robert’s death is a complete shock to us all. He was a wonderful man and a great friend, as well as being a trailblazer and an inspiration to others. Robert loved the sport and demonstrated what can be achieved through hard work and the right attitude.

“Throughout his extraordinary career he always played with pride and determination, and was always a credit to his country, whether representing Scotland or GB at home or abroad. The basketball community has lost a great role model and a true friend, and the thoughts of the whole community are with his family at this difficult time. We will miss him.”

Tributes have come flooding in across social media from former teams and teammates:

Honestly can't get my head around the passing of my friend Rob Archibald. We played in Spain for a year together. As well as a number of years together on the national team which also competed at the 2012 Olympics. One of the hardest mofos I had the privilege of being around. He always tried to improve our teams. Whether that was sacrificing his own game or offering advice. He was about winning as much as anything or anyone I know. I absolutely loved playing with this guy. I also enjoyed his company off the court. His personality wasn't for everyone and rubbed alot of people the wrong way haha and others loved him. He was very much like Marmite in that regard but we got along really well right off the bat. I think half of it was because he realised that I wouldn't take any shit from him and I believe he respected me for that. Only a month younger than myself. It really highlights the important shit, but makes it that much harder to believe he's now gone. Rest easy bro ❤️

Sad, very sad. @RobertArchibald, former teammate on the @memgrizz, has passed away. My thoughts are with his family and friends.
RIP, Robert🙏🏻😞 pic.twitter.com/8ENJ4ZZc21

Very sad to hear the passing of Robert Archibald. I'm proud to have shared the same court as him. His achievement from Dunfermline to the NBA is one of the greatest in Scottish sporting history. Rest in power Arch. https://t.co/asZfhl2gXQ

Former Basket Zaragoza center Robert Archibald has passed away at age 39. Our thoughts are with his family and friends 🙏🏻. RIP, Robert. pic.twitter.com/vCLOpj4GnC

basketballscotland are deeply saddened to learn of the unexpected passing of Scottish basketball legend Robert Archibald. Our thoughts are with Robert's family and friends during this difficult time.

We’ve lost a member of our #Illini family much too soon.

The 1998-1999 Fighting Illini basketball team was my first ever favorite team. The first ever Illini game I went to in 1999, I remember looking at the program and deciding Robert Archibald was going to be my favorite player. RIP to an Illini legend. pic.twitter.com/hihNXo3plK

Being homesick for Illinois after we moved to South Carolina, we loved watching our home state’s basketball team; dynamic players with such personalities! Because of Robert Archibald and his teammates, we became Illini fans for life. He was one of our favs. RIP, Arch. pic.twitter.com/OEbqfgsfyO

Robert Archibald was a tough-as-nails center during a great era of Illinois basketball. The university confirms he has died at 39.https://t.co/XquRU1TIcJ

Grew up watching former @IlliniMBB standout Robert Archibald play, sad to hear of his passing today. I went back into the @WCIA3 archives to find some old video of him helping the #Illini win back-to-back Big Ten titles. Those were fun teams to watch.